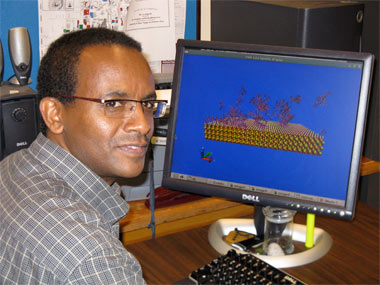 Modeling polymers --Mesfin Tsige, assistant professor of physics in the College of Science at Southern Illinois University Carbondale, works on a computer model showing how a polymer’s molecules organize on a substrate. Tsige, who recently received a CAREER grant from the National Science Foundation, is working on ways to greatly improve the efficiency of solar cells using certain conducting polymers. (Photo by Tim Crosby) Download Photo Here

CARBONDALE, Ill. -- Humans have dreamed for years of harnessing the power of the sun for clean, unlimited energy. And while scientists and engineers have had success, many problems with efficiency and reliability remain.

A researcher at Southern Illinois University Carbondale, however, is investigating new materials that potentially could greatly increase solar cell efficiency and improve a host of existing technologies as well.

Mesfin Tsige (pronounced “Sít-gey”), assistant professor of physics in the College of Science, is looking at electrical conducting polymers and how they might lead to a revolution in solar energy. The polymers -- molecular structures made up of long, repeating structural units -- are mixed with semiconductor quantum dots. They hold many potential efficiency advantages over silicon, the material typically used in solar cells now.

Using powerful computers both on campus and off, Tsige is examining how different conducting polymers interface with surfaces at various temperatures, and how their molecules organize under such conditions. The way the molecules organize directly impacts the polymer’s electrical and optical characteristics.

Tsige’s work is getting a big vote of confidence from the federal government. Recently, the National Science Foundation awarded him a coveted CAREER grant, which is aimed at establishing promising researchers as they begin their independent research careers. The highly competitive grants pay for research, equipment and personnel, and last a number of years.

Tsige will use the five-year, $432,000 grant to purchase computer equipment, hire graduate assistants and support a visiting summer scholar for three years. He also will fund physics education efforts, including one that involves his sharing his story of success that led him from the backcountry of Ethiopia to universities and government laboratories in the United States.

“I want to share my story of studying physics in Africa and show students here that if they try their best they can be successful,” Tsige said.

Tsige works on computational physics, using computers to simulate and analyze how the dynamics and structure of polymers and liquid crystals change at the interfaces. It takes a lot of computing power, and Tsige routinely uses 20, 40 or even 96 linked processors to model these reactions. The grant will help move that number up to 128, which will provide even more power to simulate the complex dynamics involved. He also will apply soon for computing time on NSF-supported supercomputers, located around the country.

Polymers are part of everyday life, from furniture to carpeting to many computer parts and building materials. The polymers Tsige is working with, however, are among only a handful that will conduct electrons. This is a key characteristic for solar cell construction, which uses different types of nano-scale materials sandwiched together to capture photons from the sun and translate them to electricity.

Tsige is looking at both the basic science and application of these polymers, aiming to find the best methods for creating solar cell materials.

To do this, Tsige is looking at polymer layers as thin as .4 nanometers -- 1 nanometer is one billionth of a meter -- up to the comparatively thick 25 nanometers. How the polymer organizes itself can actually vary depending on its depth.

“We are interested in these dynamics and how the molecules move and their motion is constrained,” Tsige said. “For instance, under certain conditions the polymer might act more like a solid down near the substrate but more like a liquid further away. We want to understand how this is so.”

The key to a better overall solar cell lies in electron collection and conduction, both of which lead to efficiency. Most solar cells currently use silicon to capture and transfer electrons from the sun. Silicon is fine, Tsige said, but it has certain disadvantages when compared to the potential of polymers mixed with the quantum dots. For instance, silicon can only capture one light frequency, where semiconductor quantum dots with their tunable band gaps can capture most frequencies, greatly improving efficiency simply in that respect. Silicon also suffers from the so-called “electron-hole recombination,” which allows electrons to escape without being used.

Conducting polymers, on the other hand, are showing great promise in capturing the photogenerated electrons as soon as they are made and efficiently transporting them to the electrode surface, he said.

“It’s what everyone is working on. If we overcome and minimize the electron-hole recombination problem, that’s a big step forward. It would mean very efficient solar cells and a big step forward in the design of the next generation of solar cells. Polymers can solve it,” he said.

While the main application Tsige is studying involves solar cells, the work also has implications for other settings, such as coatings, adhesives, light-emitting diodes and sensors. All such technologies depend on the polymer’s molecular organization and how it affects its electronic and optical qualities.

He also has strong education components built into his project, which is a requirement of CAREER grants. One portion has him teaching high school teachers how to use computer simulations to demonstrate atomic-level chemical reactions and other physical changes. During his portion of the class, taught at SIUC, he will provide teachers with computer simulation “movies” he created that show conceptual processes, “to give students a visualization of what happens where we cannot see it.”

Another aspect of his education component involves Tsige visiting high schools in Illinois and Missouri and encouraging them to study physics, even when it is challenging to do so.

“In the Ethiopian countryside, far from the capital city, we didn’t have many resources. We didn’t have a very good library, for example. But compare that to here.

“In the U.S., we sometimes complain of having fewer resources in small schools, but you can overcome these problems if you use the opportunities that you are given,” Tsige said. “I want to share my story, as a physics students growing up in Africa, and show them it is possible to become successful if you try your best.”