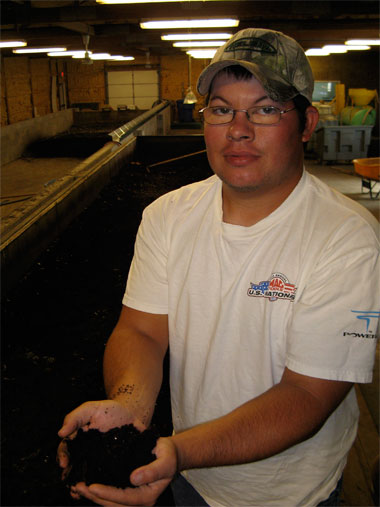 CARBONDALE, Ill. -- When it comes to fertilizer production, can the lowly worm compete with the giant chemical company?

Yes, it can -- at least with tomatoes. After finding they could grow this popular crop in soil enriched with vermicompost (the fancy term for compost made by worms), researchers at Southern Illinois University Carbondale are looking at just how much of the stuff it takes to get the best yields.

Funding for the project comes from the state’s Conservation 2000 Sustainable Agriculture Grant Program, which encourages farm practices that protect and enhance soil, water and air.

Most home gardeners know the value of compost -- a mix of trimmings and clippings from the yard, fruit and vegetable scraps from the kitchen, and the famous “well-rotted manure.” Compost creates air pockets in the soil that not only improve drainage but, by holding more water and nutrients, increase drought resistance and feed the plants through the growing season as well. In addition, plants root better in the looser soil.

“Compost offers a long-term, sustainable benefit, not just to the soil but to the plants and organisms that live there,” said S. Alan Walters, resident veggie expert at SIUC’s College of Agricultural Sciences.

But the growing ranks of small farm and specialty crop growers -- to say nothing of the average home gardener -- don’t always have access to that vital third component: cow or horse manure. In addition, cows have fairly large “carbon footprints,” a concern for many who emphasize sustainable agriculture. Enter the worms.

“It takes four pounds of raw material to make a pound of compost, and worms can break down a pound of food waste in 24 hours,” said Bryan D. Shupe, a 23-year-old graduate student from Toledo, who will write his master’s thesis in plant and soil science based on this project.

“Plus, they reproduce prolifically because they’re hermaphrodites [they have both male and female sex organs]. Under optimal conditions, each worm will produce an egg sac with three to five worms each week. A sac takes three weeks to hatch, and those worms take three weeks to mature.”

In an earlier study, Shupe and Walters found that vermicompost performed pretty much like that made with animal manure. But unlike traditional compost, which relies on heat to break down landscape and food wastes, vermicompost temperatures seldom exceed 72 degrees, a plus for both the worms and the smaller critters that call compost home.

“Worm casts (the technical term for their manure) provide a good place to live for microorganisms that produce growth-promoting substances for the plants,” Shupe said.

In looking for a workable alternative to synthetic fertilizer, Walters and Shupe chose to pair vermicompost with tomatoes not just because so many gardeners and commercial growers plant them but because they’re “heavy feeders.”

“We wanted to see if the soil would provide enough nutrients through the growing season,” Walter said.

“Tomatoes generally require split applications of synthetic fertilizers, once before planting and again about six weeks later, because those fertilizers release their nutrients all at once. With vermicompost, the nutrients -- especially nitrogen -- are released slowly throughout the season, so growers would save both on labor and input costs. Synthetic fertilizer isn’t cheap any more.”

“Above that 15- to 16-ton level, you start to get a lot of extra foliar growth and increased production of tomatoes that have deformities of some sort,” Walters said.

Because most specialty and home garden crops have different nutrient needs, Walters plans to conduct additional rate studies for peppers, onions, garlic and green beans. In addition, he will be looking at how vermicompost might influence antioxidant levels in these vegetables. 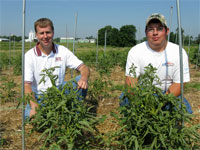