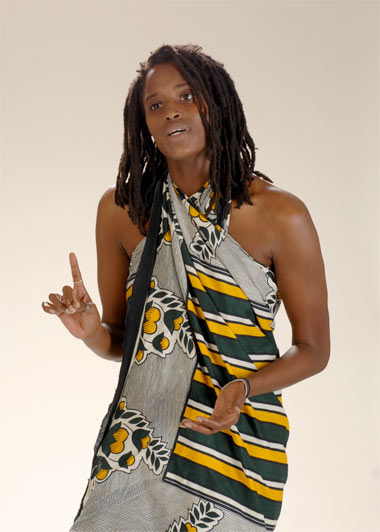 CARBONDALE, Ill. -- Some people dance to it, some people boom it out in their cars and some people hate it. But Charlie Dorsey says hip-hop music is a voice for the voiceless and a potential cultural tool of unification.

Dorsey, a speech communication major with a specialization in performance art at Southern Illinois University Carbondale, will present the findings of her research, conducted partly through a hip-hop workshop, at the upcoming Sixth Annual ILSAMP/McNair Research Symposium, set for 8:30 a.m. to 4:30 p.m. on Friday, July 10, at the Morris Library auditorium.

Dorsey, a McNair Scholar, will present “(Re)Poetics of Hip-Hop,” a look at the elements of hip-hop music and culture and the people who are part of it. She held a workshop recently, advertising for participants in true hip-hop fashion -- by word of mouth. She described the workshop as “diverse,” with a mix of race, gender and age in attendance. The youngest participant was 12 years old, she said, while other participants were in their 30s.

Dorsey identified four elements of hip-hop. One is the MC, a spoken word artist. Other elements include graffiti, a creative expression often used as a memorial; the DJ, who is responsible for the beats and sounds of hip-hop music, and dancing, especially break-dancing. Workshop participants had the chance to demonstrate their dancing skills and MC abilities with a DJ on hand to assist.

One of the more telling elements of the workshop, Doresy said, was the graffiti exercise. “We tagged on a chalkboard,” she explained, noting that “tagging” is writing one’s name or the name of a departed friend or family member, in a creative, symbolic or stylized way. “By the time we were done with the graffiti, it had all merged together and you could no longer tell where one person’s art began and another’s ended,” she said.

Dorsey said her workshop focused on what she described as the “Underground Railroad of Sound,” hip-hop below the popular radio-play radar.

“We talked about the corporate take-over of hip-hop, but we agreed that hip-hop will never really go away,” she said, adding that hip-hop began as poetry put to music rather than as music and beats with added lyrics.

“It can be a nurturing and healing tool,” she said. “The people at the workshop were dissimilar, but they have the shared love of hip-hop. Though it has expanded from its roots, it started as a way to protest and to express.”

Dorsey acknowledged that not all hip-hop messages are positive, but she said positive results can come when people are unafraid to examine the truth.

Dorsey noted that while the workshop promoted a feeling of community based on similar interests, so in another way does the McNair Scholars program at SIUC.

“The program really gives us the skills we need for graduate school,” she said. “We are all serious students interested in research. We’ve spent a lot of time together, seeing a movie as a group or other casual socializing, as well as preparing our research for this forum.”

The McNair Scholars Program targets outstanding low-income, first-generation college students who are interested in pursuing graduate studies. The research program pairs students with a research mentor. Other research opportunities for undergraduates at SIUC include REACH, Research Rookies, undergraduate assistantships and the University Honors program. For more information, visit the Web site at http://mcnair.siuc.edu/.