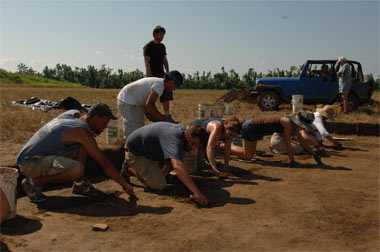 CARBONDALE, Ill. -- It’s a steamy hot day in Southern Illinois. A group of college students gathers together in a farm field under a nearly cloudless sky. They are digging in the dirt. They are after “ground truth.”

Welcome to the Southern Illinois University Carbondale Archaeological Field School, hosted by the SIUC Center for Archaeological Investigations at the Kincaid Mounds State Historic site near Brookport in Massac County.

This year, the students are working in the flat farm field. Behind them, several large, clearly man-made mounds rise from the ground, flat-topped and conspicuous in the struggling bean field. In past years, digs have taken to the mound tops. This year, though, the site director is looking for houses, and those are not on the mounds.

“I’m interested in the domestic architecture and layout and what that tells us about the people who lived here,” Tamira Brennan, an SIUC doctoral student from the Chicago area and the site director this year, said. “We’ve had a really amazing year.”

Amazing, as in finding eight complete clay pots, an owl effigy, a greenstone axe head and other artifacts.

“I was telling my students after the first clay pot find that this may be the only time they’ll find a complete pot. Then they found more,” Brennan said almost ruefully. This dig may not feature life-defying stunts like the average Indiana Jones dig, but finding so many artifacts in so few weeks is a big enough thrill to spoil an inexperienced archaeologist.

Paul D. Welch, associate professor of anthropology, oversees the field school. He said he remembers his first dig well. The lack of artifacts or other evidence of prehistoric civilization proved that the boundary of the site in question did not extend as far as the dig site, he said.

This field school is aided by technology, he noted. A geophysical imaging survey and a magnetromic map help today’s archaeologists find the probable sites of some 150 houses. As Welch pointed out, the archaeologists don’t know for certain what is in the ground until they dig into it. That’s what they call “ground truth.”

Often, evidence of a house is as slight as discolored soil. Other times, a find might include the remains of a thatched roof. All of it contributes to an understanding of the mysterious people who inhabited the Kincaid site so long ago.

“Nobody really knows who they were,” Brennan said. “They were gone before the time of European contact. We have no modern day analogy for them.”

The artifacts date from about 1000 to 1450 A.D. Kincaid Mounds is one of the largest Mississippian sites. Another point of distinction, one not lost on the students, is that Kincaid was the training ground for the big names in archaeology and anthropology in the golden days of the discipline.

“This is where people came to be trained,” Brennan said. “Some of the nation’s most famous scholars trained right here, doing the same kinds of things we are doing. We have their field notes.”

The students can enroll in the field school for one or both of two summer sessions. Through an agreement with the village of Brookport, they have lodgings near the mounds. Some students return to the field school year after year. Some go on to other field schools in other locations. But one thing all of them learn is that archaeology is a discipline made up of other disciplines, Welch said. On site, field school students put to use principles of mathematics and geometry, biology, architecture and geology, among other disciplines.

“There’s hardly any field of research that doesn’t somehow relate to archaeology,” Brian Butler, director of the Center for Archaeological Investigations, said.

For Brennan, the site is the key to her doctoral dissertation, in which she will examine the placement of houses on the site. Her early investigation, aided by the magnetromic map, shows that some of the houses are arranged with courtyards while others are in rows and others seem not to have been built according to any particular city plan. Her research will contribute to the growing picture of those who built the mounds and the ancient chiefdom around it.

For more information about the SIUC Summer Archaeological Field School, contact Paul Welch at pwelch@siu.edu or 618/453-4740 or visit the Web site at www.siu.edu/~cai. To learn more about the Kincaid Mounds, see www.kincaidmounds.com. A new observation platform makes visiting the mounds an educational adventure. Directions to the site are on the Kincaid Mounds Web site. 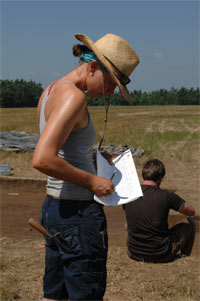