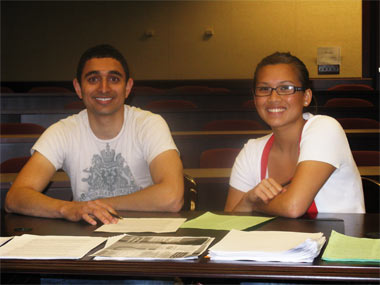 Embarking on a journey -- Ameya Patankar, left, and Jacqueline Pham are two of 39 pre-law students participating in the Council on Legal Education Opportunity summer regional institute hosted by the Southern Illinois University School of Law. The intense six-week pre-law program helps students who will be embarking this fall on their legal careers at law schools throughout the country. Patankar is from Naperville; Pham is from San Jose, Calif. This is the first time the SIU School of Law has hosted the nationally recognized program. (Photo by Pete Rosenbery) Download Photo Here

CARBONDALE, Ill. -- After an eight-hour trip from her home in northern California to St. Louis earlier this month, Jacqueline Pham sat in the airport terminal waiting for a shuttle to start the next stage of her journey toward law school.

A teaching assistant who met Pham at the airport took out a laptop and gave her a legal case to read and review. Never mind that Pham’s first day as part of a six-week pre-law summer institute was still more than 24 hours away.

“I was a bit overwhelmed the first couple of days,” said Pham, 22, who is from San Jose, Calif. “The professors are really nice. You hear stories about how professors are out to get you; they are not like that at all here. They really want you to succeed.”

Reporters and photographers are welcome to cover the institute, which runs through July 17. To make arrangements for interviews or for more information contact Alicia Ruiz, the law school’s director of communications and outreach, at 618/453-8700.

Pham and 38 other aspiring law students from across the country are in Southern Illinois for six weeks to hone their academic skills. The intense program started June 7 and approximates the first one-and-one-half months of law school.

“One of the things CLEO does is help students figure out how to be a law student,” said Dean Peter C. Alexander, who is also serving as CLEO director. “It’s a very effective program.”

CLEO is a non-profit project of the American Bar Association Fund for Justice and Education. More than 6,000 economically disadvantaged students have participated since its inception in 1968.

This is the first time the SIUC law school is serving as host, but the fourth institute for Alexander. He taught in a CLEO workshop at the University of Pittsburgh School of Law, and co-directed two CLEO institutes while at the Dickinson School of Law at Pennsylvania State University.

Alexander, who is directing the program here, is pleased with the quality of students on campus.

“The students are impressive; they are enthusiastic. I think it’s a wonderful thing for the SIU School of Law to host them,” he said. “This is a very bright group and it seems to be a hard-working group.”

The University of Pittsburgh School of Law is the other CLEO host this summer;.

Ameya Patankar, 24, from Naperville, earned a bachelor’s degree in economics and finance from the University of Illinois at Urbana-Champaign in 2007, and was involved in business intelligence consulting. Even after a few days, the program’s benefits are clearly evident, he said.

Patankar and Pham both noted the striking difference in study habits required for law school compared to their successful undergraduate days. Time management, and “going above and beyond to really understanding the material” is critical, Patankar said.

“Everyone here has worked really hard to get this point,” he said. “In terms of competency and just having the drive, I think every student in the program has it. How you use your time -- those 24 hours in a day -- it just comes down to time management at this point, and then going above and beyond to really understanding the material.”

Developing the basic skills of how to read cases, how to think about the law, and how to prepare for class are critical to future success, Alexander said.

“A lot of students begin law school thinking that law school is actually the fifth year of undergrad,” he said. “It’s not. It requires a different kind of study, it requires different skills brought to your studying, and it usually requires many more hours of studying.

“Lots of students fail at law school because they were not prepared for those new challenges. CLEO definitely helps prepare them to meet those challenges,” he said.

The goal, Pham said with a smile, is to go to bed at a “decent hour,” noting that she is regularly studying until midnight. Her undergraduate studies were a priority but Pham said she never had to study like that as an undergraduate student. She earned a bachelor’s degree in law and society with a minor in Asian-American Studies from University of California Santa Barbara in June 2008.

“CLEO has made me realize that I can succeed in law school. It just takes a lot of work,” she said.

Pham said she is learning how to read and brief cases and she feels prepared for law school. Accepted at California Western School of Law in San Diego, Pham is on the wait list at the University of the Pacific McGeorge School of Law in Sacramento.

Assistant Professor Christopher W. Behan, who is teaching criminal law, said he is impressed with the students’ preparation and enthusiasm for studying law. Other law school faculty involved with the program are Professor R.J. Robertson in contracts, Professor Alice M. Noble-Allgire in property, and Associate Professor Sheila Simon and Adjunct Professor Valery Christiansen Behan in legal research and writing.

“They are coming to class prepared and engaged with the materials,” Christopher Behan said. “They have been willing to take risks, to raise their hands and participate in class, and to publicly grapple with difficult legal issues.”

Doing that is not as easy at it sounds, Behan said, noting he spent much of his first semester of law school, especially in large group settings, “desperately hoping my professors would not call on me.”

“It was only later in my law school career that I realized the value of engagement and class participation,” he said.

The opportunity for students to learn how to be law students before they start law school, and having already experienced “most of the rites of passage that make the first-year law school experience so intimidating for many students,” is a primary benefit of CLEO, Behan said.

Students who succeed in the CLEO program are very marketable to law schools, Alexander said.

According to the organization, about 60 percent of the participating students receive admission to a law school before the institutes begin; more than 90 percent of the students enter law school in the fall. Once students complete the program, they become CLEO Fellows and receive up to $5,000 in financial assistance from the Thurgood Marshall Legal Education Opportunity Program.