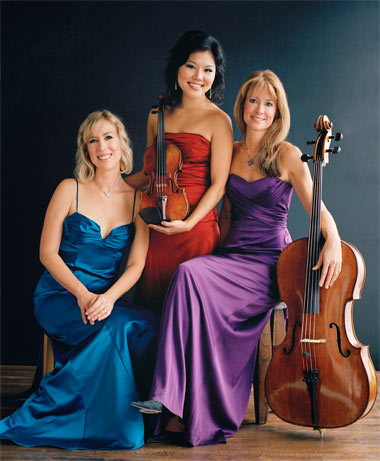 Bringing part of the festival across the river to SEMO’s River Campus is part of SIUC’s community outreach, Ed Benyas, artistic director of the festival, said.

Eroica is an award-winning musical trio featuring Erika Nickrenz on piano, Susie Park on violin and Sara Sant-Ambrogio on cello. Critics refer to Eroica as “one of the first all-female chamber music ensembles to reach the top echelon.” They gained early recognition when, in 1991, they won the Naumburg Chamber Music Award. They followed up with a Lincoln Center debut and an international tour.

The Eroica repertoire includes music spanning three centuries, from baroque to “café music,” including classical masters and new composers alike. They are masters of the Beethoven Triple Concerto in particular, having played it arguably more than any other trio, including on the German television program “Klassichl” with the Munich Symphony. They sold out the Weill Recital Hall at Carnegie Hall when they appeared there as part of the “Distinctive Debuts” series. They’ve also performed at some of the top European venues in Vienna, Frankfurt, Stockholm and more. They are also active in the recording studio, with five CDs to their credit with Angel/EMI Classics. However, Eroica remains committed to musical education, playing at times for young audiences or leading master classes for students. For more information, as well as individual biographies, visit their Web site at www.eroicatrio.com.

The Southern Illinois Music Festival is a multi-venue festival featuring classical and jazz music. For a complete schedule of all festival events and information about the artists, visit www.sifest.com.