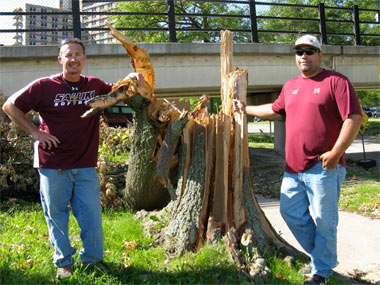 Chainsaw heroes -- Scott Wright (left) and Monte Childers, along with fellow Plant and Services Operations employee Ira Tripp, used chainsaws and other equipment to clear countless trees from vehicles, roadways and buildings around the Southern Illinois University Carbondale campus after the May 8 storm. Wright’s personal truck was loaded with his own tree-trimming equipment that he quickly shared in the storm’s aftermath. Wright and Childers are next to what’s left of a massive oak tree that fell across the walkway in front of Grinnell Hall. It was one of the many trees they and Tripp, assisted by other SIUC employees, cleared shortly after the storm. (Photo by Christi Mathis) Download Photo Here

Employees ‘just did what we could’ after storm

CARBONDALE, Ill. -- Scott Wright will simply tell you that it was a classic case of being in the right place, with the right equipment, when the May 8 storm struck.

Wright, an employee of Southern Illinois University Carbondale’s Plant and Service Operations, was working near the east campus residence halls that day. After the storm passed, he looked up and saw a tree smashed across a minivan at Sam Rinella Fields, located in front of the Brush Towers residence halls. Three people inside were scrambling to escape through the blown-out rear window. That’s when Wright, co-owner of Top Notch Tree Service where he works in his off hours, remembered that he still had his equipment from a job the previous evening in his personal truck that was parked nearby.

The Carterville man quickly fired up a chainsaw and freed the van. But then, he spied another fallen tree that was pushing an SUV precariously onto two wheels. He grabbed ropes and a wench and removed the tree. He pulled another from on top of a car parked nearby.

Everywhere Wright looked, trees were down, filling parking lots, lying on vehicles, blocking roadways. Somewhere along the way, Wright handed chainsaws to fellow PSO employees Monte Childers, of Cobden, and Ira Tripp, of Buncombe. The three-man chainsaw gang kept working, going on to clear a giant oak that had splintered and fallen across the overpass walkway, blocking the pathway in front of Grinnell Hall.

They moved on, laboring to clear nearby South Wall Street. Joined by a half-dozen SIUC painters and a supervisor, the men went to one fallen tree after another, quickly losing count of how many they removed from the roadway as they worked their way south from Brush Towers to the Southern Hills apartment complex. Wright said it could have been as many as 40. They just kept going.

“It was the coolest thing,” Wright said. “We all have different jobs but we just pitched in and worked together and got things done. There was just so much devastation. It was everywhere you looked. We just did what we could.”

About 10 or 11 p.m., Wright got a call saying that due to the lack of electricity, Saturday commencement ceremonies would take place in McAndrew Stadium, rather than Shryock Auditorium and the SIU Arena as originally planned. But, there was a problem. A giant oak had fallen across the entrance to the stadium. No big deal. It just meant a few more hours with a chainsaw to clear the way. Finally, about 1:30 a.m. Saturday, Wright headed home where he took a quick shower by flashlight since he had no power. Then it was right back to the SIUC campus. After all, there were still trees down everywhere you looked.

Wright, a 10-year PSO employee who previously spent seven years on the campus tree-trimming crew, was soon operating a crane. He pulled trees off of the ROTC building, removed a massive oak tree from where it had fallen on Quigley Hall and hauled trees off of Evergreen Terrace apartment buildings.

But, he was also quick to say he’s not a hero. Rather, he said he was just one of many who did everything they could to help others and the University recover from the massive storm that caused an estimated $5 million in damages on campus alone.

“I just happened to be in the right place at the right time with a truckload of chainsaws,” Wright said.