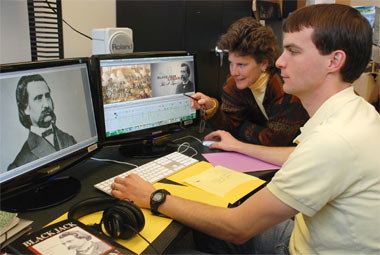 CARBONDALE, Ill. -- As he prepares to receive his master’s degree on Friday, May 8, a Southern Illinois University Carbondale graduate student is collecting awards and high praise for his documentary work.

Chris Yoars’ introspective look at the December 1951 New Orient No. 2 underground mine disaster earned a Best of Festival King Foundation Award in the audio category at the Broadcast Education Association’s Festival of Media Arts.

Along with his work chronicling the memories of community members of one of the worst mining disasters in Illinois history, another of Yoars’ projects will air on WSIU TV later this month. Yoars’ one-hour TV documentary on Gen. John A. Logan, “Black Jack Logan,” airs at 11 p.m., Tuesday, May, 19, with rebroadcasts at 1 p.m., Sunday, May 24, and 8 p.m., Monday, May 25.

He received the award, which includes a $1,000 prize, last month at the BEA convention in Las Vegas. The competition received a record 878 faculty and student submissions in 13 categories.

The idea for the radio documentary came from the 2006 book, “Death Undergound: The Centralia and West Frankfort Mine Disasters,” by Robert F. Hartley, and David Kenney, professor emeritus of political science, author and historian. Southern Illinois University Press published the book.

Yoars, who is from Carol Stream, is in professional media and media management studies. He viewed the project as a way to collect the oral histories and give back to Southern Illinois. The radio documentary initially began as a class assignment. It was at the urging of his wife, Katie, that Yoars submitted the entry.

WSIU is always looking for student-produced content to feature on the station, and became interested in the project because of the interest and importance to the local community, said Jeff Williams, station manager and news and public affairs director for WSIU radio. Williams said the documentary was well researched, well produced and edited, and required little editorial input.

“Chris did an excellent job, he is an outstanding producer,” Williams said. “He has a feel for telling a story, and utilizing the elements of oral history to help tell this story of the people who experienced this terrible disaster.”

The documentary connected with station listeners, as well, Williams said.

The documentary aired on WSIU and is available via online podcast at http://www.publicbroadcasting.net/wsiu/.jukebox?action=viewMedia&mediaId=807863.

“It’s a great example of the type of collaboration that we actively seek at the station with the students in the College of Mass Communication and Media Arts,” Williams said. “We regularly encourage and solicit this type of student production work.”

Yoars earned a bachelor’s degree in journalism and mass communications at Iowa State University. He will not be the only family member who walks the commencement line Friday; Katie Yoars will earn her master’s degree in political science.

Yoars said he has an interest in history and natural history, and wants to go into media production, possibly as an independent media producer. He started work on the upcoming Logan documentary in 2007.

“I am very proud of Chris Yoars and what he was capable of accomplishing with his thesis project. His documentary, ‘Black Jack Logan,’ is of the utmost professional standards and his story-telling skills are evident,” said Jan Thompson, an associate professor in radio-television, and Yoars’ adviser in the radio-television documentary unit.

Yoars is a teaching/research/graduate assistant in the College of Mass Communication and Media Arts.

“It’s certainly great to have it on WSIU and I think it’s one way to give back to the community,” Yoars said. “This is a person of local interest. It’s great local programming for Southern Illinois to showcase their local hero.”

Jak Tichenor, a producer with WSIU Public Broadcasting, said Yoars’ approached him last fall asking if he was interested in providing narration for the Logan project. Already familiar with Yoars’ previous work on the region’s coal mining history, Tichenor said he was impressed by the detail Yoars’ goes into in terms of his sources, and the quality of his writing.

“Chris has an eye for these kinds of projects; he’s got a passion for it,” Tichenor said. “I think he’s going to do very well and represent SIUC very well in the professional field. This is a young man who is going to make a name for himself.”

“We’ve always liked to work as closely as we can with faculty and promising students not only in our college, but around the University,” Tichenor said. “Chris really stands out as one of those very promising young people who is doing work at a level that is basically commensurate with established professionals in the field. He’s got a passion for history and he wanted a project that hadn’t been explored before, at least in video form.”