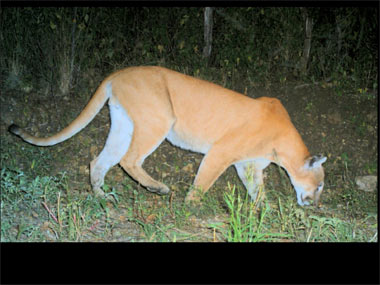 Cougar sighting -- A puma, also known as a mountain lion or cougar, is captured on a motion-activated camera in the Mexican state of Sonora, where two researchers from Southern Illinois University Carbondale -- a research scientist and graduate student -- are studying the wildlife population. (Photo provided) Download Photo Here

CARBONDALE -- The Sierra Madre Occidental in Sonora, Mexico, can be a desolate place, defined by craggy rock formations and thorny scrub brush so dense in areas that it can seem almost impenetrable.

A pair of researchers from Southern Illinois University Carbondale – a research scientist and graduate student -- are rolling back the curtain on this challenging landscape as they seek to characterize its wildlife population and study one reclusive species of big cat in particular.

The Mexican state of Sonora lies directly south of the Arizona border. Despite its inhospitable conditions, the area is home to a surprising variety of wildlife. Foxes, skunks, a type of white-tailed deer known as Coues deer and collared peccaries, a type of wild swine, are just a few examples of the diverse wildlife, along with pumas, also known as cougars or mountain lions.

Modern day cowboys, or “vaqueros,” are some of the few human inhabitants in the approximately 500-square-kilometer area around the Sierra Madre foothills where the researchers are concentrating their work. Vaqueros live in Spartan conditions, with little running water or electricity and no refrigeration. They know the area and its ways, including the best means of picking a trail through the hellish thorn scrub that can blind the horses and pack mules they use for transportation.

Even among these local experts, however, few have witnessed the quarry the SIUC researchers seek: the jaguar, at the northern-most reach of its range.

But Clay Nielsen, an associate scientist with SIUC’s Cooperative Wildlife Research Laboratory, has an observation method not available to the local ranch hands. Nielsen, along with graduate student Steven Borrego, uses a grid of 70 motion-activated cameras to capture the reticent carnivore on its nightly rounds.

It’s all part of an effort aimed at finding ways to manage and preserve wildlife -- including large carnivores like the jaguar and puma -- while also protecting human interests in the area, such as livestock ranching. The researchers’ role is assessing the overall wildlife ecosystem; finding out how animals interact with their environment and each other. They are using the thousands of images captured by their mobile cameras to make a series of observations that they will then use to form an analysis.

“Everything that walks by our cameras, we get a picture of,” Nielsen said.

But jaguars…in a desert-like environment?

“Jaguars actually used to live in the southwest United States as well,” Nielsen explained recently. But humans ran them out, killing many of them in the process. The jaguars in Sonora represent the northernmost breeding population in their distributional range, which extends to southern South America.

While slightly smaller than the more elongated puma, jaguars are fast, low to the ground and powerful predators. In this area, a male might average 130 pounds or so, and it hunts by itself, stalking and ambushing prey.

Sometimes, the prey may include cattle or calves, which leads to friction between the big cat and local ranch owners. Although Mexican law protects the jaguars, it is difficult to enforce such restrictions in such a wide, sparsely traveled area.

“This is why we want to help fine-tune management techniques that will address these issues,” Nielsen said.

Primero Conservation Outfitters, a U.S. company that charters deer hunting parties and ecotourists into the area, helped organize the research project. Money from those activities goes toward jaguar conservation on the study area, which is owned by a consortium of ranchers. The consortium is known as “Programma de conservacion del Jaguar en La Sierra Alta de Sonora.” These ranchers are looking for better ways to manage the sometimes competing interests of humans and wildlife. The study will help provide that, Nielsen said.

The researchers began the project in January of last year, with Borrego spending a large amount of time in the area from August to December of 2008. He will again venture south this June and stay through December.

The project is scheduled for completion in mid to late 2010, Nielsen said.

Borrego’s life is similar to his vaquero hosts during his weeks in the field. He brings as many supplies -- food, water, etc. -- with him as possible when first arriving. His days then consist of rising about 4:30 a.m. and basically riding the range on horseback with the Mexican cowpokes. Instead of wrangling cattle, though, he wrangles cameras.

“It’s rough conditions when compared to an apartment in Carbondale,” Borrego joked. “It’s usually an adobe house with maybe some running water. Any electricity is solar, or they hook up to a truck battery. It’s five hours to the nearest ice machine, so I try to take some of that when I go and it will last a few days in a cooler. Sometimes we go for weeks like that.”

The researchers set the motion-activated cameras up along suspected game trails. When an animal walks by, it pops a photo. Borrego leaves cameras in place for about three weeks, switching out the memory cards and downloading photos all the while, before re-positioning them at other locations.

On a good long day of riding, he can visit about nine camera sites.

“It’s slow going,” he said. “There are no paved roads, only gravel and rock-strewn paths.”

When he positions a camera, Borrego makes a survey of the area surrounding it, noting variables such as ground cover, types of plants, distance to water or human dwellings and other factors. When the photos start coming in the researchers consider how the different species may relate to each other in the ecosystem.

They ultimately place all the data in a database that will help them model and analyze the entire system.

All the hardship is well worth it, Borrego said.

“I want to contribute to the conservation of these animals,” he said. “Carnivores seem to often live close to humans, so the question is how do we co-exist? 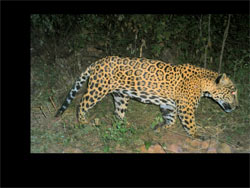 Photographic proof -- A jaguar moving down
a game trail is captured on a motion-activated
camera in the Mexican state of Sonora, where two
researchers from Southern Illinois University
Carbondale are studying wildlife population.
(Photo provided) Download Photo Here 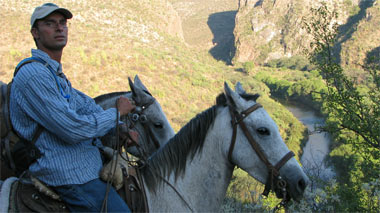 Steven Borrego, an SIUC graduate student, takes a horse around the Mexican
state of Sonora as he tends to the motion-activated cameras used to study the
local wildlife population. Borrego, along with SIUC Associate Scientist Clay
Nielsen, are conducting the study, which involves jaguars. Borrego spends
weeks in Spartan living conditions and rides the range daily, downloading
wildlife photos for the study. (Photo provided) Download Photo Here