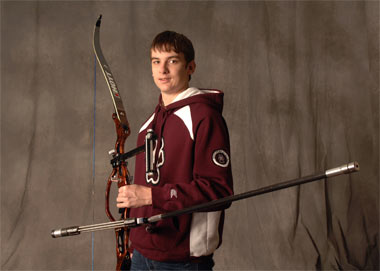 On target -- Lee A. Stewart, a sophomore majoring in political science at Southern Illinois University Carbondale, is not only hitting the mark in the classroom but also in archery competition. Stewart, a 2008 Elverado High School graduate from Dowell, is a Presidential Scholar and carries a 4.0 grade point average. He also recently finished second among 103 competitors in the 2009 U.S. National Archery Collegiate Indoor championships in the male recurve bow competition. He will compete for collegiate All-American honors and a spot on the U.S. men’s national team in the World University Games at next month’s outdoor nationals event in California. (Photo by Steve Buhman) Download Photo Here

CARBONDALE, Ill. -- Southern Illinois University Carbondale sophomore Lee A. Stewart is on target when it comes to academics and archery.

In his first year in college, the 19 year old from Dowell finds time to not only maintain a perfect 4.0 grade point average in political science and work in the University’s financial aid office -- he continues to hone his skills as one of the nation’s top archers.

The top three finishers there will represent the United States in the World University Games in July in Belgrade, Serbia. A top-10 finish in the outdoor nationals should ensure Stewart a place on the collegiate all-American squad.

The son of Dennis and Trisha Stewart, Lee Stewart is a 2008 Presidential Scholar, and was co-valedictorian at Elverado High School. Because he earned college credits while still in high school, Stewart is already in sophomore standing.

While he concedes that juggling his schoolwork, archery and a job is difficult at times, Stewart continues to meet the challenge. Before going to the indoor nationals in Wichita, Kan., last month, Stewart was up until 2 a.m. studying every night. He completed a mid-term exam prior to leaving. He is taking mostly honors-level classes.

In addition to his twice-a-week training with the Saluki Shooters Archery Club, Stewart trains separately four to five times a week for about two hours a day. He is also working on an undergraduate research proposal.

“It’s a juggle to balance it all,” he said. “It takes away from my training but it’s worth it because I came here for college, No. 1.”

Stewart hopes to attend law school after college and become an attorney, possibly a prosecutor. He did not envision this success when he picked up a bow six years ago as a way to continue deer hunting a bit longer each year.

A lifelong “Saluki at heart,” Stewart said he’s thankful for the opportunities available at SIUC. The University “cares about what the students do both in and outside the classroom,” and it is visible that professors are student-oriented, he said.

“This University has given me a lot of opportunities that I wouldn’t have had otherwise,” he said. “They’ve allowed me to come down here and received a great education. Because of that, I think it’s my job to repay the University for the investment they’ve made in me.”

Stewart took up the sport when he was 13 years old as a way to extend deer hunting season. Within a few months he started with Olympic-style competition. Within two years he was in the top three in the national competition in his junior division level.

He uses a Hoyt recurve bow. Unlike a compound bow, a recurve bow does not have any wheels or pulleys to lessen the bow’s 50-pound weight. The recurve bow is the only bow used in the Olympics.

His skill allowed him to be a resident athlete for nine months for USA Archery at the United States Olympic Training Center in Chula Vista, Calif., training for the 2008 Olympic Games. He finished seventh in both the Pan American Games trials and World Games trials in 2007, before returning to Southern Illinois for his senior year in high school.

Stewart hopes to compete for the United States in the 2012 summer Olympics in London, England, and the 2016 summer Olympics. Chicago is a finalist for the 2016 Games, with a decision by the International Olympic Committee expected in October.

While at the outdoor Olympic training center in 2007, Stewart practiced for six to eight hours a day, six to seven days a week. He said he is shooting better scores now, so he might have been over-training a bit when he was in California.

Stewart’s average score in indoor competition is 286 out of a possible 300. The 10-ring diameter, which brings the highest score, is a bit larger than a quarter. The 9-ring is about three inches in diameter. Stewart shoots from 20 yards indoors, and from 70 meters, or 76.3 yards, in outdoor competition.

Archery brings a greater level of focus than other competitive sports, said Stewart, who played football, basketball and baseball in high school. Emotions play a big part in those sports and can help you succeed in those sports, he said.

“In archery, you have to get rid of your emotions in many ways and suppress them so you are still able to shoot,” he said. “It’s all about precision.”

A second member of the Saluki Shooters Archery Club also competed in the national collegiate indoor championships. Kasey Minor, a graduate student in accountancy, placed 48th in the male college compound bow event -- just his second national competition. Minor is president of the Saluki Shooters and will earn his graduate degree in December. He is the son of Rex and Melody Scott of Waltonville.