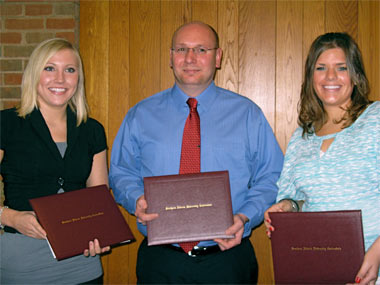 Student Employee of the Year and Finalists -- The Office of Financial Aid, in cooperation with the Midwest Association of Student Employment Administrators, presents an annual Student Employee of the Year Award. This year’s winner and finalists are, from left, finalist Ashley White, from the Office of Supplemental Instruction; award winner Martin Dubbs, from the School of Journalism; and finalist Jennifer Anderson, from University Housing. (Photo by Andrea Hahn) Download Photo Here

Dubbs, a veteran of the U.S. Army and the son of Ruth and Martin Dubbs Sr., is studying in the Master of Public Administration program. He works in the School of Journalism with William H. Freivogel, the school’s director. Freivogel described Dubbs as a “perfect fit” for the award, saying that Dubbs exemplifies the “reliability, quality of work, initiative, professionalism, (and) uniqueness of contribution” desired in the Student Employee of the Year.

Among Dubbs’ contributions as a student employee is a report he wrote on management issues in the School of Journalism. Freivogel explained that Dubbs did not hesitate to point out areas where he believed improvements were possible.

“It is the rare person who would take on such a tough task and who could carry it off without making someone angry,” Freivogel wrote.

He noted also that Dubbs acted as assistant academic adviser, “helping students plan their course work and making sure they get the credits they need for graduation.” He also analyzes assessment reports filed by faculty, Freivogel said. Dubbs was also the organizing force behind a journalism school trip to Washington, D.C., for President Obama’s inauguration.

Dubbs plans to go into government service when he graduates, with an eye toward foreign service.

White, the daughter of Penny and Doug Estes of Godfrey and Jerry White of Troy, Mo., is a peer supervisor in the Office of Supplemental Instruction, a paraprofessional position. She started in the program as an undergraduate assistant peer leader for a Freshman Interest Group. White’s supervisors describe her as a “loyal employee,” “an enthusiastic advocate,” and a living example of the supplemental instruction philosophy every day.

White is a hospitality and tourism major.

Anderson, the daughter of Carol and Doug Anderson of Bushnell, works for University Housing as a member of the marketing team. She started with housing as a tour guide and office assistant. In that capacity, she led tours, managed office duties and sought new marketing opportunities, which she accomplished in part by keeping current with local trends affecting University Housing options.

Later, Anderson served as SIUC’s Residence Hall Association Vice President of Intercollegiate Communications/National Communications Coordinator. In that role, she represented SIUC at local, state and national conferences and business meetings. She was a University Housing top 10 resident her sophomore year, and maintains a 3.8 grade point average. She is also active in her academic life, holding officer positions pertaining to both sides of her double major in health care management and psychology. Anderson graduates this May and will continue her education as a graduate student.

In addition to providing income to students, the Student Employment Program enhances student development and career professionalism by creating challenges and teaching responsibility. The Office of Financial Aid, in cooperation with the Midwest Association of Student Employment Administrators, sponsors the annual “Student Employee of the Year Award.”