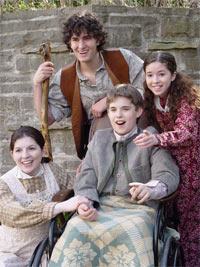 The Department of Theater and the School of Music join forces to bring the Frances Hodgson Burnett story of redemption, inner healing and the power of a positive mindset for four performances. Thursday through Saturday performances begin at 7:30 p.m. Sunday’s performance is a 2 p.m. matinee. Tickets are $15 for adults, $12 for senior citizens and $6 for students. Tickets are available the day of the performance at the McLeod Theater Box Office or in advance by calling 618/453-3001.

This production features sets by guest artist Laurencio Carlos Ruiz, costumes by Kathryn Wagner, and lighting by Mark Varns. The production elements come together to keep the visual and story-telling elements in constant motion.

“The story is about rebirth, life that grows from what is seemingly dead,” J. Thomas Kidd, director and choreographer, said. “We tried to capture that in the production. We wanted to see the production grow.”

The inspirational story focuses on young Mary Lennox, an orphaned girl sent to live with her widowed uncle. Mary discovers a neglected and locked secret garden, formerly kept by her uncle’s deceased wife, Lily. Mary sets out to restore and bring new life to the garden and the household. Her efforts and the story of her uncle Archibald’s release from the past touch anyone who has ever known loss or disappointment.

Ellen Conn, dramaturge for “The Secret Garden,” and her assistant, Jenna Brown, offer a free pre-show lecture on April 19 beginning at 1:30 p.m. in the Dean’s Conference Room, adjacent to the McLeod Theater lobby. They will discuss the “three promises” playwright Marsha Norman believes are central to the play.

• Collinsville -- Katelyn Ratliff, freshman in musical theater, as the Maid

• Pinckneyville -- Stacie McDaniel, a junior in theater, as Mrs. Shelley