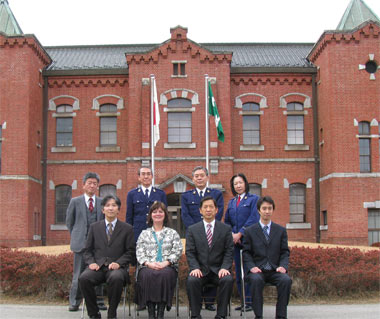 SIUC ambassador in Japan -- Kimberly Kempf Leonard, director of the Center for the Study of Crime, Delinquency and Corrections, was a guest and speaker of the Ministry of Justice in Japan, where she discussed the merits of the life without parole sentence as an alternative to the death penalty. Here, she joins top officials in the Ministry of Justice -- including several alumni of the SIUC CSCDC program -- in front of Chiba Prison, the largest in Japan. (Photo provided) Download Photo Here

CARBONDALE, Ill. -- Kimberly Kempf Leonard, professor and director of the Center for the Study of Crime, Delinquency and Corrections (CSCDC) at Southern Illinois University Carbondale, returned recently from Japan, where she was a guest of the Ministry of Justice. While there, she toured several Japanese prisons and jails and met with top officials in the corrections industry in Japan.

The visit strengthened already strong ties the Center has with the Ministry of Justice in Japan. Since the1960s, the Correction Bureau of the Ministry of Justice in Japan sends one or two students a year to the CSCDC. Distinguished Professor Elmer H. Johnson traveled several times to Japan himself to further the ties between the two institutions. Leonard’s trip was a continuation of the exchanges.

Leonard said while she was in Japan, she gave presentations on the sentence of life without parole as an alternative to the death penalty. Her presentation was not necessarily meant to persuade, she said, though she presented findings showing decreased public support for the death penalty where a life without parole sentence is available. She also explained some of the unintended consequences that have happened in the United States as a result of life without parole -- consequences such as higher health care expenses for aging prisoners and escalating numbers of serious-crime prisoners in the prison population.

“It was ironic -- there were four executions while I was there,” Leonard said. “And I was there to talk about life without parole as an alternative to the death penalty.”

During her stay, Leonard addressed top officials from the Ministry of Justice, officials with the corrections bureau, and students in an elite training program for careers in corrections, where she tried to recruit future students to the SIUC program.

Naturally, there are differences between Japanese prisons and those in the United States. For example, in Japan there are no state corrections systems, only a federal criminal justice system. Leonard noted also that the law in Japan requires prisoners to work, so every prison in Japan has some sort of manufacturing facility connected with it. Inmates are fed different meals according to the work they do, she said. More physical labor earns more calories than other work.

“It was really fun to discover so many top officials in the Ministry of Justice are alumnae of our program,” she said. “And they sure love SIUC!” 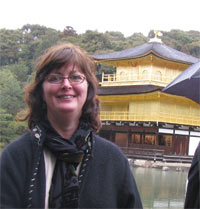 Seeing the sights -- Kimberly Kempf
Leonard, director of the Center for the
Study of Crime, Delinquency and
Corrections, visited Japan this spring to
strengthen already strong ties between
the CSCDC and the Ministry of Justice
in Japan. Here, Leonrad visits the
Kinkaku-ji, the Golden Pavilion Temple
in the old capital of Kyoto. (Photo
provided) Download Photo Here