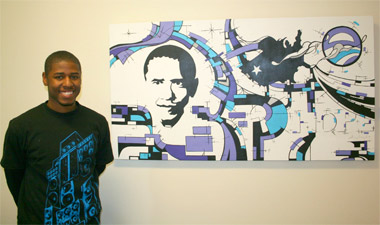 “The Dynamics of Hope” -- Keith Jacobs, a first-year MEDPREP student on the Carbondale campus, created the painting “The Dynamics of Hope” to commemorate the election of the country’s first black president. He is primarily a graffiti artist, he said, and this painting highlights that style. (Photo provided) Download Photo Here

CARBONDALE, Ill. -- Keith Jacobs, a student in the SIU School of Medicine’s Medical/Dental Education Preparatory Program, created “The Dynamics of Hope” to commemorate the election of the country’s first black president.

While the painting, on display on the second floor of Wheeler Hall, is partially a portrait of President Barack Obama, it also serves as Jacobs’ commentary that now is a hopeful time but one fraught with challenges.

“The painting represents the struggle to get a black president in office, but also the challenges he faces now that he is there,” Jacobs said.

Jacobs considers himself to be a graffiti artist. His usual canvas is a wall, and his typical medium might include spray paint. But for this project, he confined himself to a canvas -- albeit a big one, at 5 feet, 6 inches by 3 feet -- and acrylic paint.

“I wanted to paint a portrait of Barack Obama in time for the inauguration -- but that didn’t happen,” Jacobs said, wryly noting that he has less time to paint now that he is in graduate school.

Instead, his painting is included in a Black American History Month display in Wheeler Hall.

Jacobs pointed out some features of his painting that he hopes viewers notice. First and foremost is the unexpected use of color -- an attribute common to graffiti art, he said. For example, Jacobs included a stylized version of Obama’s campaign logo, but represented it in turquoise, white and purple rather than red, white and blue.

He also painted in the words “Hope” and “U.S.A.” in the painting. He said he intends the painting to be one that reveals itself gradually to a viewer rather than all at one glance.

The painting will remain in Wheeler Hall through the end of the month. Jacobs said he hopes to find ways to display it, including entering it in contests, in order to keep the painting in the public eye but still in his possession.

Jacobs is a native of San Francisco, Calif. He completed his undergraduate work in Atlanta, Ga. He is on the Carbondale campus for the beginning of his medical school training, and plans to go on to the SIU School of Medicine in Springfield.