“Mike has accomplished much, going above and beyond where other SIUC officials have gone,” said Bennett. He noted despite cancellation of Lennie’s original flight to Florida the young man with “perseverance and a 2 a.m. flight confirmation” made it to Tampa just in time for the officials’ clinic at the January National Intramural Recreational Sports Association (NIRSA) event.

“Despite all of that, he officiated better than I have seen him officiate before,” Bennett said. “Mike has been a constant leader and mentor to a lot of our younger officials, helping them get officiating jobs in the local junior and senior high schools.

Lennie was one of 44 from across the country earning the honor of officiating at the national championships and one of just 15 chosen as All-American. Lennie claimed the All-Tournament Official title at the State of Illinois Flag Football Championships in 2007, one of just two from Illinois to do so, earning a bid to the National Intramural Recreational Sports Association National Flag Football Championships in January 2008 at the University of Texas at Dallas.

He repeated the accomplishment in 2008, officiating at the state event at Western Illinois University and earning a trip to the University of South Florida at Tampa. And this time, he won the highest award possible in claiming the All-American Official designation.

“I was pretty happy about it,” Lennie said of the honor. “I worked pretty hard to be a good referee and it was a nice little reward at the end to be named All-American.”

The CBS College Sports Network aired highlights of the tourney along with the entire men’s championship game in January. Lennie refereed the championship co-recreational football game. Surprisingly, he didn’t bother to watch the televised segment so he’s not sure how much airtime he secured.

Lennie is the first All American Official for football from SIUC. Deveon Stiff, of East St. Louis, earned the NIRSA designation for basketball in spring 2007.

Lennie, a Crete native, is the son of Scott and Karen Lennie. An ardent Bears fan, Lennie played wide receiver for the Marion Catholic High School football team before switching to the officiating side of the field. An athletic training major, Lennie is a four-year referee for Recreational Sports and Services and also officiates high school games.

And whenever possible, he’ll continue to don the black and white striped shirt and make the tough calls on the turf. He wants to continue officiating at high school games and hopes to someday work at the college level as well.

“I enjoy the game,” he said. “I liked playing it a lot and this is the closest thing to playing football you can get.” 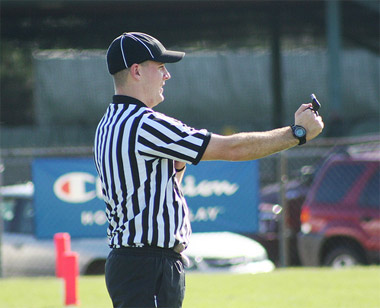