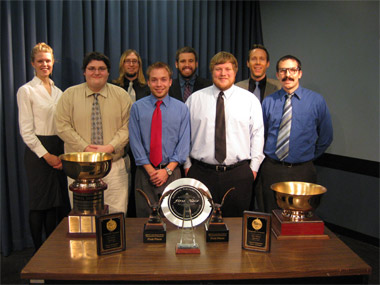 CARBONDALE, Ill. -- They came, they saw, they out-argued everyone – again. The Southern Illinois University Carbondale Debate Team returned victorious this week from a double tournament debate weekend in San Diego, winning both tournaments.

“This is as good as it gets – unless we win nationals,” Todd Graham, director of debate at SIUC, said. In fact, SIUC did win nationals last year, at the National Parliamentary Tournament of Excellence. The duo of Kevin Calderwood (a senior in political science from Chesterfield, Mo.) and Kyle Dennis (a recent graduate hailing from Blue Springs, Mo.) were honored by both the Illinois House of Representatives and the Illinois Senate for their achievement.

This weekend saw the debate team at the Point Loma Round Robin and the Sunset Cliffs Classic debate tournaments in San Diego. Graham said this is one of the largest and most prestigious tournaments on the debate schedule.

The first tournament was the Point Loma Round Robin Tournament of Champions, which includes only the top 20 debate duos in the country. The other is an open-invitation debate, and it attracted more than 100 debate teams from around the nation.

The Saluki duo of Calderwood and Adam Testerman, (a junior in journalism from Springfield, Mo.) won both tournaments – a feat in itself. What makes the victory even more astonishing is that this is a repeat double-win – last year, the Calderwood-Dennis duo won both the round-robin invitational and the open tournaments in San Diego as well.

“Last year was the first time any team had ever won both the round-robin invitational and the open tournament in the same year,” Graham said. “So now, SIUC has won both tournaments two years in a row – with Kevin doing a double repeat. That’s pretty huge.”

Debate team members devote considerable time during the academic year to preparation and research. They must be prepared to debate current political issues, with little advance notice of the topic.

For more information about the debate program at SIUC, contact Graham at tgraham@siu.edu or at 314/495-7278.

The National Parliamentary Tournament of Excellence is set for March 21-23 at the University of California at Berkeley. 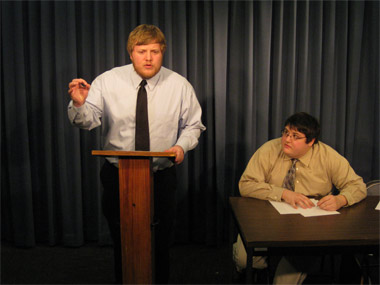