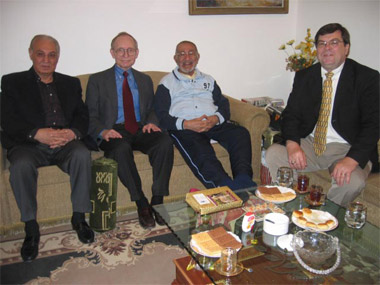 CARBONDALE, Ill. -- University officials are encouraged about the prospects of attracting Iraqi students to Southern Illinois University Carbondale through a higher education initiative under way in Iraq.

Dietz said Iraq’s initial goal is to send 500 Iraqi students abroad this fall to universities as a pilot project. The Iraqi government will use oil revenues to pay for the full scholarships, according to published reports.

Dietz and Jackson said they believe that students will be enrolled at SIUC this fall as a result of the initiative.

“We haven’t admitted anybody yet, but I would be amazed if we didn’t,” Dietz said.

SIUC was one of about 20 universities from the United States, Europe, New Zealand and Australia participating in events Monday and Tuesday in Baghdad.

Zuhair A.G. Humadi, who earned a doctorate from SIUC in political science in 1978, is a senior adviser to Iraqi Vice President Adel Abdul Mahdi and executive director of the Iraq Education Initiative.

“We’re very excited about the potential, and very proud that we have an alum who is the person that this initiative probably would not exist without his leadership.” Dietz said.

Both Jackson and Dietz note the University’s legacy when it comes to international students. While in Baghdad, they met with Humadi and Saad Jabr at Jabr’s home.

In 1947, Jabr traveled to Carbondale to enroll as a freshman. While other international scholars were studying at SIUC prior to his arrival, Jabr was the first international student to graduate with a bachelor’s degree. Jabr became a prominent businessman in Southern Illinois and is now living in Baghdad.

The University’s more than 60-year legacy in international education will play a strong role in attracting students, but Dietz also sees other potential.

“This also gives us an opportunity to meet some needs of a country at a point in time where they have asked us to help,” he said. “From a philosophical point of view, I think it’s important that we step in and strengthen bonds between not only institutions between here and Iraq, but hopefully this will go a long way in relationships between the Iraqi government and the U.S. government.”

Among other schools attending ceremonies earlier this week were representatives from the University of Iowa, Kansas, Kentucky, Texas A&M, Vanderbilt, Virginia Commonwealth and West Virginia.

Dietz returned with inquires from 76 students from Tuesday’s educational fair, which attracted a large number of graduate students.

The Iraqi students that Dietz and Jackson met with are “very eager” to study in the United States, Dietz said.

“Everybody viewed this as a terrific opportunity -- for advancement for themselves, their families, and the potential to return to Iraq and make it a better place,” Dietz said.

It was a theme Jackson said he heard repeatedly. Iraqis have been “so blocked from the outside world … and the lifeblood of higher education and research is the ability to interact with peers and exchange ideas around the world.”

“They haven’t had that for a very long time. This is a totally new era for them and they are eager to take advantage of it,” Jackson said.

There were several poignant moments, also. Jackson recalls a determined young woman interested in pursuing a master’s degree in engineering who repeatedly practiced her English by talking with them. The woman asked Dietz to please “do whatever you can to help me achieve this goal.’’

“It’s important to me,” Dietz recalls the woman telling him. “I will come back and make a contribution. I would like for my mother to be able to see that.”

The encounter parallels the same passion Dietz sees when talking with students from Chicago and Southern Illinois: “Give me a chance. I want to do something to make my family proud of me.”

The students Dietz and Jackson met with didn’t discuss the tough environment that many in the country face. They talked of the future, the opportunities, “and saw education as the vehicle to get there,” he said.

When he returned to his office Thursday morning, Dietz had an e-mail from a student in Iraq interested in obtaining a doctorate in agricultural sciences. He also received an e-mail from one of SIUC’s two Iraqi students who is “absolutely delighted” that the University went to Baghdad and is offering to help new students, Dietz said.

In reflecting on his experience, Dietz explained security was “unbelievable there.” Surrounded by people with M-16s and AK-47s, Dietz noted the numerous checkpoints he and Jackson traveled through.

“Upon reflection, while this was an important trip and we were playing our role as institutional and University representatives and this initiative is going to be great, we would not have been able to be in the country not very long ago. To me … a terrific amount of credit to all the soldiers, some of whom gave their lives, who have made it safe enough for us to be there and tell a different story about education and how we help rebuild.”

Dietz and Jackson talked of the visit with Humadi and Jabr -- not unlike a gathering of Saluki alums anywhere in the United States.

“He was beaming talking about his experience here,” Dietz said of Jabr. “It was just like four guys sitting around reminiscing talking about old times. The only difference is we were in Baghdad inside a fortress in a green zone.”