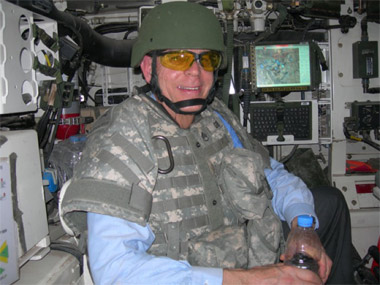 Saloom plans to discuss the day-to-day reality that civilians in the Iraq war zone face and the contributions Iraqi civilians are making to the overall effort. The Paul Simon Public Policy Institute is sponsoring the event.

The luncheon begins at 11:30 a.m., Thursday, Jan. 29, in the Student Center ballrooms. The luncheon is free and open to the public, but advance registration is required for meal considerations. To register, contact institute project coordinator Christina Rich at 618/453-4078 or by email at clrich@siu.edu by Monday, Jan. 26. Open seating will be available for those who wish to only listen to the speech and not be included in the meal.

Saloom currently serves as an adviser to Ambassador David M. Satterfield, who is a senior adviser to the Secretary of State and coordinator for Iraq. He directed the Iraq Reconstruction Management Office in 2006 and 2007, where he managed the $22 billion Iraq Relief and Reconstruction Fund.

“The institute is delighted to host Ambassador Saloom to share his experiences serving as a U.S. diplomat around the world, including a tenure in the very serious and difficult environment of Iraq from 2006-2007,” said institute interim director Matt Baughman. “As director of the Iraqi Reconstruction Management Office, Ambassador Saloom oversaw the expenditures of billions of dollars the United States provided Iraq to rebuild -- making it what has been called the largest economic reconstruction program since the Marshall Plan.”

During his visit, Saloom and his wife, Anne, who also works for the State Department, will hold a “career seminar” for students interested in careers in the U.S. Foreign Service. The seminar is from 3 to 4 p.m., Jan. 29, in the Student Center’s Mississippi Room.

Anne Saloom is a Foreign Service nurse practitioner and worked in the U.S. Embassy Clinic in Baghdad.

The lecture will provide a different perspective on issues in Iraq, Baughman said.

“There has understandably been a major focus on the American military presence in Iraq since 2003 but there has not been as much of a look at the on-the-ground diplomatic efforts in Iraq that have accompanied the men and women of the Armed Forces who have sacrificed so much,” Baughman said. “This is an opportunity to hear from a distinguished Foreign Service officer who has also spent a considerable amount of time in Iraq working to improve the quality of life of its people.”

Saloom became the first Syrian-American ambassador in 1993 when appointed U.S. Ambassador to the Republic of Guinea. He served there until 1996. Many scholarship students attended SIUC while Saloom served as ambassador.

“I have been consistently impressed by the international outreach of the University,” he said.

The biggest misconception the country continues to have about the Iraqi reconstruction and transition is that the reconstruction effort “was done by young inexperienced political appointees,” Saloom said.

“By the time I got to Iraq in 2006 the reconstruction effort was run by experienced industry experts who had run companies in their fields (oil, electricity, water, sewer, transportation) or had years of experience in fields like health and education,” he said.

During his time there he visited the then-10 provisional reconstruction offices throughout the country. There are now 27.

The most satisfying part of his current work is helping the Iraqi government “do ever more of the reconstruction itself as we phase out building things for Iraq and concentrate our ever-smaller contribution to helping them build the capacity to do more themselves.”

“Iraqis now spend more than 10 times what the U.S. does on projects in Iraq,” he said.

Salooms’ Foreign Service experience is varied. He served in the Office of Terrorist Finance and Sanctions, Bureau of Economic and Business Affairs from 2003 to 2006. He also spent a year leading State Department participation in recovering more than $1 billion in Iraqi assets held outside of Iraq, then covered Iraqi insurgent finance and other near east terrorist finance issues.

Baughman credits Herrin resident Taffie Helleny in helping arrange the Salooms’ visit. Helleny is a family friend, and suggested the institute invite Saloom to speak. Saloom was born in Urbana, but his father grew up in Herrin, and Saloom still owns family land in Buncombe. He’s visited the area since his childhood and his family still has close friends and relatives here.

Saloom said he was always interested in foreign affairs. His mother is a French and Spanish teacher, and his father was in the electronics field with many international contacts visiting his home while he grew up.

His tours include Morocco, Saudi Arabia, Zaire and Germany. From 1987 to 1990 he served as deputy chief of mission at the U.S. Embassy Niamey in Niger. From 1990 to 1993, Saloom was deputy assistant secretary for finance and development at the Bureau of Economic and Business Affairs (EB), the Department of State, and the lead U.S. negotiator for official debt rescheduling. He served as minister-counselor for economic affairs at the U.S. Embassy in Berlin from 1997 to 2001. In 1996 and 1997, he served as director of the Africa Economic Policy Staff, Bureau of African Affairs at the Department of State.