CARBONDALE, Ill. -- Her photography professor at Southern Illinois University Carbondale told her just before she graduated that he expected one day to see her work in a gallery.

Well, how about a feature in Time magazine?

Anne (Wickersham) Savage, a 1994 SIUC alumna, created a mosaic image of Barack Obama, made from individual images of faces photographed while she shot panoramic views of Obama’s rallies during the presidential campaign. She thought posting the image on the photo-sharing Web site Flickr and marketing a poster version might be just the thing to supplement her Ann Arbor, Mich.-based photography business.

To her astonishment, Time magazine contacted her about using the image for “an upcoming issue of the magazine,” she said.

“I thought it might be the Person of the Year issue, but I didn’t find out for certain until right before it came out,” she said. “This is like a fairy tale to me.”

Besides using her image to illustrate its Person of the Year story, Time magazine featured Savage in a two-page article. In addition, her image is part of a display in a Washington, D.C., gallery for the inauguration, and poster versions will go to all those who attend the Michigan Ball during the inauguration.

“It’s been pretty amazing,” Savage said. “I’ve been selling between 10 and 25 posters a day, and besides that, I’ve heard from family members, old friends I haven’t seen in years, photography students, individuals who want to talk about the image.”

The spotlight hasn’t been bad for business, either, Savage said. Various corporations have contacted her about doing mosaic or panoramic work for them. And the Lansing (Mich.) Art Gallery contacted her to join an exhibit, proving right her photography professor, now dean of the College of Mass Communication and Media Arts, Gary Kolb.

Savage said the inspiration for the mosaic came during her freelance work at Obama rallies. Her specialty is panoramic imagery, especially for interactive use on Web sites. She worked several political rallies in this capacity, including rallies for Obama’s opponent, John McCain. The diversity of the crowd at the Obama rallies, though, particularly moved her, she said.

“I was borderline emotional looking out into those crowds,” she said. “There was such diversity. Every other person was old or young or black or white. There weren’t clumps of younger white people or older black people. They were all there together.”

Savage’s image contains nearly 6,000 images of individual faces arranged to create an image of Obama. She calls the image, “Dare to Hope: Faces from the 2008 Obama Rallies.” The poster version of the image includes a brief quote from Obama: “Out of many, we are one.”

“The blue in the flag is from the faces of people in shadow, the reds and yellows in the stripes are people indoors at Joe Louis Arena (in Detroit), and the white is from people in bright sunlight,” she said, explaining how she combined the images to create the mosaic.

A highlight of the experience, Savage said, is that Obama himself signed a copy of the poster and returned it to her. Because she found such inspiration in his presidential campaign, she said, his thank you note to her made her feel validated as an artist.

And while things are certainly looking up for Savage and her photography business, hard work more than luck is behind it. She waited tables after graduation, she said, before landing a job at the St. Louis Post-Dispatch. Her job there was digital archiving of photographic images, and it’s where she became familiar with the capabilities of digital imaging. After marrying and moving to Michigan, she said, she decided to go into business for herself. She did freelance photography for print media as well as her commercial panoramas.

Now, though, she may be able to sustain her business even more on her own terms.

“It’s hard to be an artist when you are working, even part-time, for someone else,” she said.

“I love SIUC,” she said, recalling her days as a hopeful college student. Kolb worked with her on her senior project, she said, and told her, as she was preparing to graduate, that he anticipated a successful career for her.

“That’s a nice thing to hear from your professor as you get ready to graduate,” she said.

"I remember Anne as a very creative and energetic student,” Kolb said. “As her former professor and now dean of the college, it's always great to see our alumni succeed. She continues a long tradition of our photography alumni making a creative and important visual mark in the world. I'm very excited to see her get this recognition."

To see Savage’s Barack Obama mosaic and to learn more about her panoramic photography, visit http://www.revolutionaryviews.com/home.html. 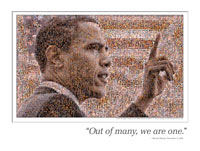