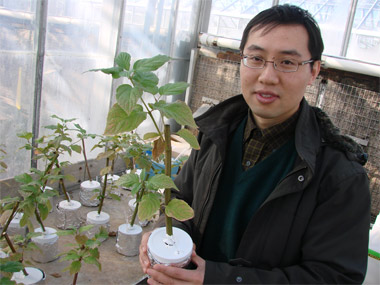 Green sentinels -- Xingmao “Samuel” Ma, assistant professor of Civil and Environmental Engineering in the College of Engineering at Southern Illinois University Carbondale, holds a dogwood cutting growing in a sealed pot at a greenhouse at SIUC. Ma works on remediation methods for contaminated groundwater, soil and sediment. He is developing methods using plants to both detect and remove contaminants. (Photo by Tim Crosby) Download Photo Here

CARBONDALE, Ill. -- Dogwood and poplar trees beautify the landscape of Southern Illinois and beyond. But a researcher at Southern Illinois University Carbondale thinks they also might someday serve as environmental sentinels, both measuring and cleaning up toxic substances in soil and groundwater.

Xingmao “Samuel” Ma, assistant professor of Civil and Environmental Engineering in the College of Engineering, works on remediation methods for contaminated groundwater, soil and sediment. He is developing methods using plants to both detect and remove contaminants.

His work focuses on the thin area of soil surrounding the roots of a plant and the plant’s above-ground parts. In a greenhouse west of the main campus, row upon row of dogwood and poplar cuttings growing in pots, along with various grasses, bear out this work, which could lead to more efficient environmental clean-up and monitoring methods.

Below ground, Ma studies how the fatty acids and enzymes secreted by various Southern Illinois plants promote bacteria in the soil, which in turn can break down certain contaminants. The substances provide the dormant bacteria with a carbon source, which can promote their growth. The bacteria then break down contaminants such as perchlorates, which occur naturally in lower concentrations as well as with fertilizers and certain military applications, such as rocket propellants. Perchlorates are thought to interfere with proper thyroid function in humans.

“I’m trying to identify certain Southern Illinois species of plants that might mitigate this type of contamination,” Ma said. “We do this by looking at how these different plants interact with bacteria in the soil.”

Using plants to actually help clean up the environment is known as phytoremediation. In other applications, plants can be used to actually extract certain toxins from the soil, sediment or groundwater. The plants can then be removed and disposed of safely.

Ma is using that ability to “uptake” contaminants in another part of his work aimed at phytomonitoring, or using plants to look for and measure contaminants in the environment. Ma is using some of the same plants to identify a mathematical formula that will help engineers not only find the contaminated areas, but measure how much is there.

To do this, Ma and his two graduate students place plants in pots filled with Southern Illinois soil or in solutions along with a known amount of contaminants. They allow the plant to grow for some time in the sealed environment before sacrificing the plant and using gas chromatography and other instruments to measure how much contaminant is in the plant flesh in parts per million.

Ma conducted such research during his doctorate work at the University of Missouri, Rolla, using single contaminants. His work now, however, is more complex in that it uses compounds of multiple contaminants -- a scenario likely found in the real world outside the laboratory.

Ma ultimately aims to write a formula that can establish an accurate ratio between the amount of contaminant found in a plant versus what is in the ground. The method, if perfected, could lead to faster, cheaper environmental monitoring using plants.

“The way this is done now is often to dig a well and measure the contaminants in the groundwater. But wells are expensive and they take a while to dig. Plus, you might dig a well in one spot and it finds no contamination, while nearby the groundwater is contaminated,” he explained. “With plants, you can spread them out and they can tell you where you’re most likely to find contamination. And that’s where you can dig the well.”

Ma currently is seeking a grant from the National Science Foundation to further fund his work at SIUC. 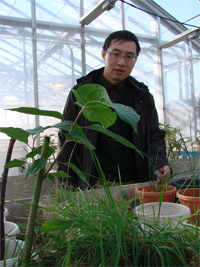 9:00 AM to 5:00 PM: Now in its fourteenth year, Outside The Box builds on its legacy as an exceptional annual new music festival and concert series. Composers and performers of international acclaim join forces with members of the SIU School of Music performance faculty to create a weeklong atmosphere of exciting, engaging, contemporary concert music. Daily seminars, discussions and presentations culminate in fantastic nightly performances. All events are free and open to the public. Not to be missed!