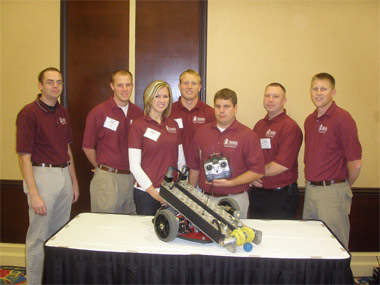 Tyler Madding, an industrial technology student in the College of Engineering at Southern Illinois University Carbondale, took it personally when the SIUC team came in ninth place out of 12 teams at last year’s National Association for Industrial Technology annual robotics competition. Forget that it was the University’s first foray into the contest. And never mind the team had just 40 days to conceive, design, build and test its robot, instead of the full nine months afforded to most teams.

Madding wasn’t hearing excuses. This year would be different, the senior from Decatur decided.

And he was right.

The Saluki team, a student chapter of the NAIT, squashed teams from around the country and brought home first place at this year’s competition in Nashville, Tenn. All six members also participated in the Industry Technology IQ Bowl at the event, with Madding placing second out of 87 participants in the national competition.

For Madding and the other members of the team, winning the head-to-head robot competition was sweet.

“We got walked on last year,” he said, his voice dripping with disdain. “This year we came to win. We’d worked so hard and put too much effort into it to see it fail.”

The “Dawg-scalator,” as it was endearingly christened, won the head-to-head competition in a field of 11 teams from schools including Cal Poly, Iowa State and the University of Northern Iowa.

Bruce DeRuntz, associate professor of technology in the College of Engineering at SIUC, said the team members are part of a unique leadership cadre within the college, sponsored by and named for Richard W. Blaudow and his wife. Brigitte. Blaudow is an alumnus who works in the industrial technology field.

“Last year they were very lucky to just be able to get it together,” DeRuntz said. “But all these students are of higher leadership stock, and they took it very personally that they got beat. They made a commitment to perform much better the next year, and now they have.”

This year’s competition involved picking up at least three racquetballs and putting them in a box faster than the other robot in a head-to-head contest. The robot designed by the SIUC team used a set of rollers on the front that directed the balls into the space between two opposing conveyer belts, which subsequently grabbed the balls and moved them along and upward before depositing them in the box.

The final design weighed about 50 pounds and measured 2 feet by 2 feet. It boasted a top speed of 10 mph.

“We based the design off farm equipment and over the summer started machining parts,” Madding said. “Everything on there, except for the electrical components, was either hand-made or made in a shop. All of it was from scratch.”

The design was superior because it took balls in one side and dumped them out on the other, leaving the operator with simpler tasks than those of other robots, Madding said. Still, operator Joe Buchanan was “pretty stressed out the whole week” of the competition, he said.

Madding said the team felt pretty good going into the competition, but nervous about what other schools might have come up with. DeRuntz said the other schools used several variations of vacuum suction and robotic arms, but none tried the conveyer belt concept.

The team faced a late scare when a crucial electrical speed controller malfunctioned during testing the night before the competition. But the team rallied and rewired the machine around the problem, hoping nothing else went wrong, “because we had nothing to fall back on,” Madding said.

The next day, after going undefeated in the double-elimination tourney, the SIUC team faced Mississippi State University -- whom it already had beaten -- in the final.

It looked like the Dawgs would walk away with the crown in the first match. But at the last second, as SIUC prepared to drop the third and final ball into the box, the MSU robot collided with the Dawg-scalator, sending the ball off the edge of the box and out of bounds. The frustrated Saluki team then faced a second competition with MSU.

“That time it wasn’t even close,” DeRuntz said, as SIUC’s team emerged victorious from the two-hour battle.

The win was thrilling, but the education students receive is even more exciting, DeRuntz said.

“It’s a very talented and committed group of students and we’re extremely proud of them,” DeRuntz said. “But the win is a byproduct. What they learned in the process is what’s important. They’re learning project management, team building, leadership skills and problem solving.”

After months of effort, the team hit a burnout wall about three weeks before the competition, Madding said. DeRuntz said he stepped back at that point and let the students learn their way through the process.

“That’s the point, and it’s fairly typical, where set-backs begin taking a toll. You flip a switch and you see smoke. It won’t work, no matter what you’ve done. That was the period when the best learning was taking place,” DeRuntz said. “It was a very realistic situation.”

Madding said he particularly learned how to reach out to others with specific expertise, such as electrical engineering and robotics. Being a mechanical engineering student, those areas weren’t as familiar and led to frustrating episodes.

“We burned up a lot of components,” he said. “But we reached out and pulled those folks into the team and things got better fast.”

DeRuntz said the team debriefed the project following the win and plans to come back even stronger for next year’s contest. He said they hope to use The Dawg-scalator in fund-raising efforts, and maybe find a place to enshrine it in glory for its national championship.

“Or maybe it can have a second life at the Saluki invitational tennis tournament,” he said with a laugh. “It’s awfully good at picking up balls.”