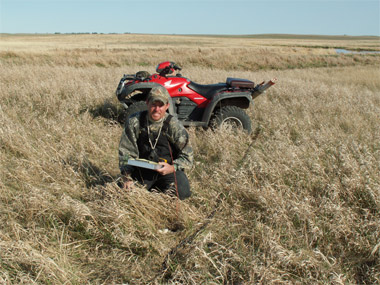 A researcher at Southern Illinois University Carbondale thinks ducks might actually be pretty smart when it comes to making choices about where and when to raise their young, going so far as to check out the neighborhood for signs of predators before making the decision to breed.

In looking at why duck productivity is on the wane, Michael W. Eichholz, associate professor of zoology at SIUC, is also challenging assumptions. Many experts assume female ducks attempt to breed every year once they reach the age of 1, unless beset with environmental issues such as drought. But Eichholz thinks hens might be a little pickier than that.

“I’m definitely challenging the assumption and the paradigm out there,” said Eichholz, who is also a member of the Cooperative Wildlife Research Laboratory at SIUC. “And I think I’m bringing more people around to thinking like I do about this.”

Eichholz is looking into why duck productivity is declining in the central prairies that stretch from the northern United States up into Canada. -- ducks’ primary residence. Some species of the popular water fowl have gone down hill in terms of productivity for the last 20 to 30 years and no one is quite sure why, although many think it has to do with nest success.

Nest success refers to whether a hen hatches her lay of eggs. In recent years, research suggests that nest success rate for these ducks hovers around 10 percent overall and 3 percent or less in certain areas.

Scientists think predators have a lot to do with that abysmal statistic, as raccoons, skunks and foxes raid the nests in search of an easy meal of eggs or mother hen. One reason predators are doing so well, Eichholz said, is the large number of abandoned houses, barns and sheds left from the days of smaller family farms throughout the prairie. One recent study cited an example of 47 skunks using one little barn to survive the winter months, he said.

Loss of nesting habitat also might play into the low nest success rate, as agriculture squeezes the ducks into smaller and smaller areas where their concentrated numbers again play to the predators’ advantage.

Eichholz is testing those theories with a three-year, $210,000 study funded by Delta Waterfowl and Wetland Research, a Canadian organization similar to Ducks Unlimited in the United States. The organization is paying trappers to remove predators from a large area in northern Saskatchewan to see if that positively affects nest success and thereby increases the number available for hunting.

Eichholz, along with graduate student John Dassow, of Chatsworth, and several undergraduates, is taking advantage of the situation to study whether predator density affects ducks’ nesting decisions before they nest and how committed they are to the prospect. To examine this, the team compares plots of land where the trappers have removed predators to nearby plots where they have not.

To find the nest, team members drag a chain slung between two four-wheelers across the fields, which typically are covered in alfalfa, hay or grasses that are about 2 feet high. When a hen takes off, the team uses a system to secretly mark the nest.

“There’s this big risk in nesting,” Eichholz said, adding that up to 25 percent of mallard hens are eaten by predators while sitting on the nest.

The team measures not only the number of nests in a given area, but also the hens’ “investment” in the nest. They determine this by measuring factors such as how a hen reacts after detecting a predator, how close she allows the predator to come before fleeing, and if she does flee, how far she goes. Another indicator of the hens’ investment lies in her willingness to “display,” or distract the predator from the nest by flopping around on the ground and feigning a broken wing.

The team is interested in linking a duck’s “investment” in her nest to other factors, such as predator density or the time it has spent on her clutch of eggs. For example, a duck that just recently laid its eggs and doesn’t have a large nutrient and time investment tends to fly away pretty readily when threatened.

“On the other hand, if she has a lot of investment and it’s getting close to hatching, they will allow a predator to get really close, and you sometimes almost have to push them off the nest,” Eichholz aid.

The team also wants to draw inferences on whether predator density affects the ducks’ investment. If a hen, for example, perceives the area is loaded with predators, will she be less inclined to protect the nest or vice versa?

“Of course the question becomes, what do they know about predator density?” Eichholz said. He thinks it might be enough, and the secret lies in the ducks’ eyes.

The eyes of all birds, fish and reptiles are constructed such that they can see ultraviolet light. To birds -- including ducks -- the UV light is just another color, but one that humans cannot see.

As it turns out, phosphorous strongly reflects UV light, and a good source of phosphorous in the prairie is mammal urine. Studies have shown birds of prey use this key indicator of mammal life to pick out hunting grounds.

“We know ducks can see it, they have the ability. So if hawks are able to find mammals like this, maybe ducks are able to avoid mammals by doing the exact same thing,” Eichholz said. “We just don’t know if they use it that way.”

To find out, Eichholz teamed up with collaborators from the Illinois Natural History Survey and the University of Illinois and broke the reduced-predator areas into smaller sections, spreading fox urine on one plot and water -- as an experimental control device -- on the other. Dassow and others prepare the plots just after the snow melts, around the start of May, Eichholz said, meaning they are in place when ducks start flying in the area looking for nesting habitat.

During the first nesting season, in spring-summer 2007, the team did see fewer nests in areas marked with fox urine. The difference, however, was statistically insignificant, Eichholz said.

During the 2008 season, researchers doubled the amount of fox urine in the experimental plots and saw significantly lower nest density in those areas compared to the control areas. The team plans to switch those plots around this spring and see if the results continue to point in that direction, he said.

“If we get the same results, than that will tell us pretty much there is something going on here,” he said.

“We’re looking at ducks deciding if they’re not likely to be successful one year, either because of nutritional limitations or lack of suitable habitat and predators, maybe they wait a year, forego nesting that year, increase their chance of survival for the year and breed the following year when they might find better conditions,” he said. “I’m looking at the possibility that it’s not just nest success causing this decline, but ducks’ ability to breed.” 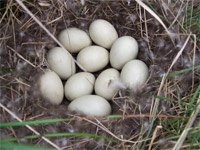 Safe and sound -- A clutch of eggs sits in
a nest nestled in prairie land in Canada.
Researchers from Southern Illinois
University Carbondale, led by Michael W.
Eichholz, associate professor of zoology
at SIUC, are studying duck productivity
rates in the nesting area in Canada.
Photo provided Download Photo Here 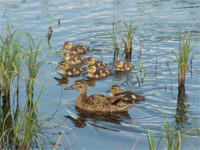 Sticking together -- A mallard hen leads
her new brood around a pond located in a
prairie in Canada. Researchers from
Southern Illinois University Carbondale,
led by Michael W. Eichholz, associate
professor of zoology, are studying duck
productivity rates in the nesting area in
Canada. Photo provided Download Photo Here