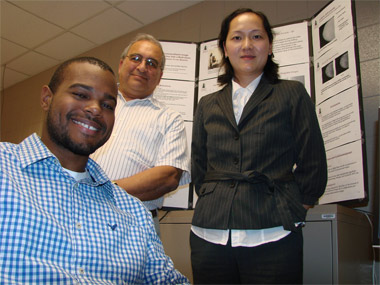 Engineering better medicine -- Cleveland “Gene” Rayford II, left, a graduate student in biomedical engineering, sits at a computer while Professor Nazeih M. Botros, center, and Assistant Professor Ying “Ada” Chen, look on. Rayford is one of eight students in the new biomedical engineering master’s degree program at Southern Illinois University Carbondale. The program trains students to work for hospitals, manufacturers, law firms, research institutes, insurance companies and a myriad of other sectors as they design and develop new medical technologies. Botros is coordinator of the new program and along with Chen is a faculty member in the Department of Electrical and Computer Engineering in the College of Engineering. Photo by Tim Crosby Download Photo Here

CARBONDALE, Ill. -- Before there were heart stents, heart monitors and MRIs, someone had to invent them. A new program at Southern Illinois University Carbondale is aimed at training the inventors of tomorrow’s medical device breakthroughs.

SIUC this year began offering a master’s degree in biomedical engineering. The program is a cooperative effort between the College of Engineering, which is leading the effort, and three other colleges at the University.

Biomedical engineers specialize in merging biological knowledge with engineering know-how. They design, operate and repair the plethora of high-tech devices health care professionals use to diagnose and treat illnesses in patients. They work for hospitals, manufacturers, law firms, research institutes, insurance companies and a myriad of other sectors. Many go on to become doctors themselves, or choose other specialties.

Now just a few months into the program, there are eight students participating. The first students joined the program this summer, while the balance signing on this fall. Several others are considering joining this spring semester, said Nazeih M. Botros, professor of electrical and computer engineering and program coordinator.

“These are extremely popular programs, especially at high-class universities,” Botros said. “Engineering has made many contributions to medicine -- such as lasers, ultrasound and others. All this modern, sophisticated equipment is a product of engineering. So this program is a very hot program around the country.”

With its addition, SIUC joins the University of Illinois Urbana-Champaign, U of I Chicago and Northwestern University, all of which also offer such a program. Botros said students in the SIUC program combine a flexible and impressive set of disciplines into a comprehensive training regimen that caters to the area in which they plan to work. A student, for example, might combine classes in mechanical engineering and biology or even pre-medicine to shape their personal program.

“Our program combines medical experience with engineering, and it prepares students to join the ranks of some of the highest paid engineers in the country,” said Botros. “The graduate has to have lots of talents, and the demands on them are high.”

SIUC students can specialize in a variety of disciplines within the program, including instrumentation, bio material, robotics and many others. After their first semester, students select an adviser from one of the four colleges and schools participating - - engineering, science, agricultural sciences and the SIU School of Medicine. Their degrees will be a Master’s of Science or a Master’s of Engineering and it will come from the college or school of the student’s adviser.

Of the current eight students, four came into the program with backgrounds in biotechnology, one from electrical engineering, one from mechanical engineering and one from biological sciences. Half of the students are SIUC graduates, with the other four coming from other countries.

Botros said the program prepares students for many careers, including physician.

“This is a very good program for those who want to go on to medical school,” he said. “You have the physics, the engineering and the biology, which are all requirements for medical school. It gives you that foundation.”

The program is spread across campus, using laboratories and classrooms in the various buildings involved. Botros said the involvement of so many different disciplines strengthens the program.

“This is unique because many other programs elsewhere are more constrained to one college or another,” he said. “Our program is just starting, we hope to grow every semester.”

Recently retired College of Engineering Dean William Osborne pushed the program, which he saw as having great potential to increase enrollment as that employment sector continued growing. Osborne said that area was the fastest-growing engineering field in the country and also attracted a large percentage of female engineers.

One of the current students in the program, Cleveland “Gene” Rayford II, said the challenging mix of biology and engineering drew him to the new program.

“My passion has always been to mix medicine with engineering, so I want to study biomedical engineering,” said Rayford, an O’Fallon native who earned his undergraduate and master’s degrees in mechanical engineering at SIUC in 2005 and 2008, respectively. “So when they started the program here it was a great opportunity to do that.”

Rayford is interested in improving bioimaging technology, making high-tech equipment such as MRI, CT and X-ray machines see better and cost less. One area he is pursuing involves enhancing existing CT equipment to provide three-dimensional images instead of the existing two-dimensional ones.

Rayford, the son of Sherrill and Dr. Cleveland Rayford I, said he plans to pursue a doctorate in biomedical engineering or become a physician. Either way, he wants to improve patient care and lead a challenging career.

“Biomedical engineers are the ones who innovate the new equipment and help physicians use the latest technology,” he said. “It is one of the most demanding fields, but also one of the most rewarding.”