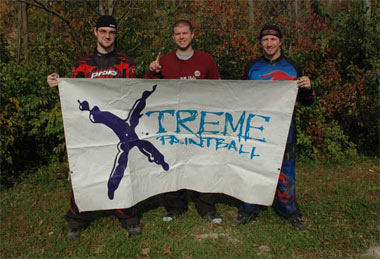 CARBONDALE, Ill. -- It’s kind of like playing capture the flag -- but with a twist. A sport club from Southern Illinois University Carbondale proved recently it has the right stuff for this 21st-century version of an age-old game by winning first place in a tournament-style paintball competition at Xtreme Paintball Park in Millstadt.

Winning the Three Man Beginners’ Tournament were Travis Zettler, Andrew Bryant and Steven Kovarik, all members of the SIUC Paintball Club. Zettler, a senior information systems technology major, is the son of Rodney and Carolyn Zettler. Fellow Sesser native Kovarik, the son of Mike and Dawn Kovarik, is a sophomore aviation flight major. Bryant, a senior from Oreana majoring in physiology/psychology/pre-med, is the son of Dan and Karen Bryant.

You could only enter the beginner’s tournament Nov. 2 if you had played in no more than one previous tournament, said Donnie Owsley, club president. In tournament play, participating teams get points for paintball hits on opposing players, for “staying alive” (figuratively speaking), for capturing the opposing team’s flag and for hanging that flag. Through round-robin play, four teams emerged to advance to the finals where the round robin format remained in place. When play ended, the Saluki paintball shooters were the top Dawgs, landing a trophy for their great play, Owsley said.

The SIUC Paintball Club, formed in November 2002, is just one of the many sport clubs the University’s Recreational Sports and Services (RSS) offers, said Gary Tisdale, assistant director of publicity and marketing for RSS. There are currently 47 sporting clubs of all types for men and women of varying skill levels and interests. The clubs are all open to SIUC students. 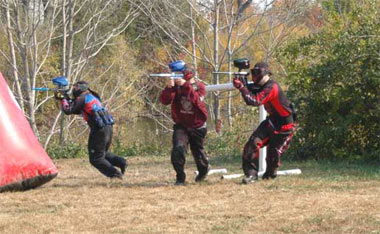