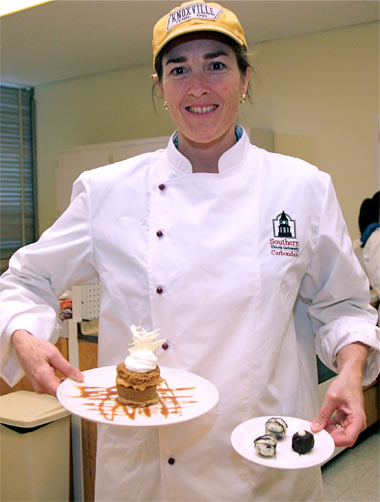 In an earlier life, Smith did this a lot. Certified as a working pastry chef by the American Culinary Federation, she worked for a catering company in Knoxville, Tenn., and managed a bakery in Pigeon Forge, Tenn., before earning her doctorate in hospitality and tourism management at the University of Tennessee.

“Few mid-scale commercial restaurants have a pastry chef on staff, so they work with convenience products -- they don’t make things from scratch,” Smith said. “In the casual dining sector, it’s all about using these products and dressing them up.”

On one recent evening, Smith did just that in front of a group of sophomore and junior students taking her quantity food production class.

She started off with a chocolate sheet cake with white icing and piped-icing decorations. She had decided to turn the cake into a cross between a truffle (a small ball of chocolate candy) and a petit four (a bite-sized, frosted tea cake). Not only would this make a nice sweet, either on its own or as a topper for a more elaborate dessert, she said, but folks could put some of the finished product in small boxes, tie them with ribbons and give them out as gifts.

“I recently saw something like that on the Internet, but this would be a lot cheaper,” Smith said.

Using a fork (though a potato masher would work more quickly), she first mashed up the cake in a large bowl.

“You want to distribute the icing throughout as it’s a kind of glue that will hold the cake together and add flavor to every bite,” she said.

The bowl with the cake went into the freezer while Smith melted chocolate, both white and dark, on the stove. Once the chocolate melted, she took the mashed cake from the freezer and rolled small pieces of it in her hands to form little balls, which she then dipped in either the white or the dark chocolate. As Smith coated the balls, she set them on parchment paper to make it easier to lift them off when she was ready to serve them. After putting the balls in the freezer to harden a bit, she then used a spoon to drizzle a contrasting chocolate over the tops.

With Thanksgiving in mind, Smith’s second dessert featured pumpkin. Using a glass jar, she first cut rounds from a pumpkin pie and from a loaf of pumpkin bread. After drizzling caramel ice cream topping on a plate in a vaguely cross-hatch pattern, she then placed a pie round on it, spooned onto the pie a dollop of butterscotch pudding she made using less milk than called for to get a thicker consistency, then added the pumpkin bread round.

Smith stashed this in the freezer, then melted white chocolate, put a splotch of it on parchment paper and dragged a fork through it to make a design. While the chocolate was hardening on the paper, she removed the pie/bread assemblage, put some whipped cream in a plastic zip bag, cut off the tip and, using a circular motion, piped out the cream on top of the bread. When she was finished, she peeled the chocolate topper off the paper and stuck it in the whipped cream.

While Smith excels at fancy desserts, the one she makes most often -- and her husband’s favorite -- is a simple cookie. Here’s her “secret recipe.” Happy holidays!

Preheat oven to 350.° Mix butter, sugar, syrup and egg till creamy. Add dry ingredients and blend. Mix in chocolate chips and nuts. Drop by tablespoon amounts on cookie sheet and bake for 10 minutes. Remove from oven when just beginning to turn golden brown. Don’t over bake. Cool for a few minutes and enjoy.