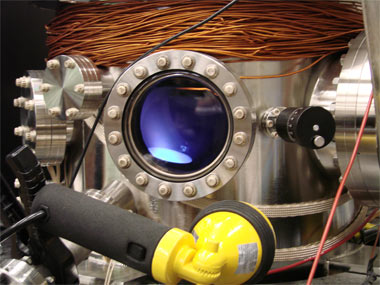 New coatings -- A reactive unbalanced magnetron sputtering machine uses high voltage to create a plasma that attaches a so-called “chameleon coating” in the laboratory of Samir M. Aouadi, associate professor of physics in the College of Science at Southern Illinois University Carbondale. The coatings change their surface or “skin” depending on the environment, lowering friction and providing strength as needed. Aouadi is working with Qingfeng Ge, associate professor of chemistry and biochemistry at SIUC, on a $50,000 grant from the U.S. Army to explore such coatings. Photo by Tim Crosby Download Photo Here

CARBONDALE, Ill. -- Some materials are strong, others are slick. Researchers at Southern Illinois University Carbondale are working on ways to combine these different materials into one that can morph as needed when the environment changes.

Samir M. Aouadi, associate professor of physics, and Qingfeng Ge, associate professor of chemistry and biochemistry, are working on so-called “chameleon” coatings based on adaptive nanocomposite technology. Like their namesake animal, such coatings change their surface or “skin” depending on the environment, lowering friction and providing strength as needed.

The projects come under the heading of tribology, which is the study of interacting surfaces in relative motion, including such forces as friction and wear.

Aouadi and Ge received a $50,000 grant from the U.S. Army to explore materials that might improve the performance of small-caliber gun barrels or helicopter turbine components, or help engines run more efficiently by increasing the temperatures at which they operate. They also might come into play in futuristic electromagnetic weapons, such as “rail guns,” which use a magnetic field to propel projectiles instead of expanding gases. In each of these cases, friction is a barrier to speed and efficiency.

Solid lubricants, however, tend to wear down quickly. Coatings that have “multi-phase” characteristics can absorb more energy and last longer and can change their characteristics when formulated correctly. That is, they can be hard, slick or both depending on the environment and how they are being used. A hard phase, for instance, would provide strength, while noble metals like gold or silver, can act as lubricants at higher temperatures.

The U.S. Air Force began working with such so-called chameleon coatings almost a decade ago, Aouadi said, looking into their possible use in bearings and other engine components. Typically, such materials combined metals and ceramics, with the combination creating a strong and slick material that can adapt to the changing environment. Such changes would include temperature, humidity and load.

“These are materials that change their skin based on the environment,” Aouadi said. “These are smart materials.”

Aouadi began by working with materials such as molybdenum nitride, molybdenum disulfide and silver, each of which can play a role in bearing loads and reducing friction. The nitrides provide good load-bearing characteristics, while the disulfide is an effective lubricant at room temperature up to 300 degrees Celsius. The silver acts as a high-temperature lubricant at temperatures of 300-500 degrees.

Above 500 degrees, however, another reaction kicks in. The sulfur begins to evaporate and is replaced by oxygen, creating silver molybdenum oxide, which is an extremely slick, or “lubricious” material.

And the materials show a lot of promise, especially at temperatures above 500 degrees, Aouadi said, as was evidenced by a test he ran this spring.

In March, Aouadi created a material using nitrides, silver and molybdenum disulfide that set a new world record for withstanding wear. For 36 hours, he and his students subjected the sample to 500 to 700 degrees Celsius, while achieving a very low friction measurement and extremely low wear.

“It went for 300,000 cycles, and I only stopped because the student had to sleep,” he said. “It has very good promise and results.”

The test results helped convince the Army to award Aouadi a grant to explore more materials combinations. As part of the research, Ge will use computer modeling and simulations to explain why certain combinations work well and anticipate others that might work better. Working at the atomic level in his simulations, Ge can help narrow the list of combinations that Aouadi ultimately will create for actual testing.

“So we have a whole array of new materials that have never been made or tested that could possibly give the same or even better results,” he said. 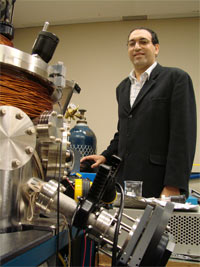 Hard and slick -- Samir M. Aouadi,
associate professor of physics in the
College of Science at Southern Illinois
University Carbondale, stands by a
reactive unbalanced magnetron sputtering
machine in his laboratory at SIUC. Aouadi
uses the machine to develop and test
so-called "chameleon coatings" that
change their surface or "skin" depending
on the environment, lowering friction and
providing strength as needed. Aouadi is
working with Qingfeng Ge, associate
professor of chemistry and biochemistry at
SIUC, on a $50,000 grant from the U.S.
Army to explore such coatings. Photo by
Tim Crosby Download Photo Here