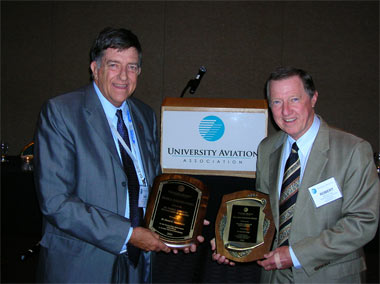 David A. NewMyer, professor and chair of the Department of Aviation Management and Flight, and Professor Robert W. Kaps received honors Friday, Oct. 17, during the University Aviation Association’s Fall Education Conference in Denver.

Paul D. Sarvela, dean of the College of Applied Sciences and Arts, applauds NewMyer’s and Kaps’ efforts, and the recognition they received.

“That two of our faculty members won these national awards in the same year is further evidence of the high-quality teaching and research that is taking place in that program,” Sarvela said. “We are lucky to have these two gentlemen as members of our faculty.”

Kaps, who has nearly 40 years in the aviation industry, was “totally surprised” to receive the award, given annually for outstanding leadership in aviation education.

“When you are there with all these people who are giants in the industry you never view yourself in that light,” he said. “It’s a tremendous feeling. I feel like ultimately after 39 years in this industry I’m a part of it.”

Kaps “is a gem in the department,” NewMyer said, noting Kaps is author of two nationally recognized aviation textbooks published by SIU Press. NewMyer received the award himself in 1993.

Kaps began with Trans World Airlines in the late 1960s through an aviation management-training program upon earning his undergraduate degree in marketing from Washington University in St. Louis. During his 14 years in various operations positions with TWA, Kaps rose to become the airline’s director of personnel. In 1978, Kaps went to Ozark Airlines, where he became staff vice president of industrial relations and chief negotiator.

NewMyer contacted Kaps about the possibility of teaching an off-campus course focusing on aviation labor relations, and Kaps started his SIUC career in 1981. His first book, “Air Transport and Labor Relations,” is the product of course handouts Kaps gave students because there were no aviation labor-relations books that fit aviation or what the program needed, Kaps said.

Kaps came to the Carbondale campus in 1991. He has master’s degrees in industrial relations and legal studies from Webster University in St. Louis, and earned a doctorate in workforce education from SIUC in 1996. He teaches undergraduate courses in labor relations and finance, and graduate-level courses in international aviation and advanced airport administration.

NewMyer is the author of nearly 60 articles and the recipient and writer of numerous grants throughout his tenure at SIUC. That includes obtaining grants for the Illinois Department of Transportation’s State Airport System Plan.

“It’s a great honor to receive this award,” said NewMyer, department chair and professor since 2000.

NewMyer is also on the Illinois Board of Aeronautical Advisors -- an appointment held since 1994.

Before coming to SIUC, NewMyer spent five and a half years in the early and mid-1970s in a variety of aviation-related positions with IDOT’s Chicago Area Transportation Study.