CARBONDALE, Ill. -- She’d given up. Kelly Kealy-Mayton kept an eye and an ear aimed at her phone all morning Monday -- wishing and hoping it would ring. It didn’t. The Southern Illinois University Carbondale graduate figured no news was bad news.

About 2 p.m., the phone rang. The man on the other end spoke the magic words for Kealy-Mayton. She was the grand-prize winner in the nationwide “Macy’s Design a Dance” costume contest for “Dancing with the Stars.” Moreover, contest officials informed her that her costume design, one of five finalists, received 3,000 more online votes than the second-place finisher.

“It was a surprise, it was a really, really wonderful surprise!” she said. “I was overwhelmed. I still am.”

And just like that, the girl who grew up in the small Southern Illinois town of Waterloo is on her way to Los Angeles. She and husband Jim Mayton are flying west on Tuesday, Nov. 4, staying until Friday. There, Kealy-Mayton will see her costume vision come to life. She and Jim will be in the audience for a live taping of the ABC hit “Dancing with the Stars,” where one of the “star” couples will wear the attire she designed.

Although the show typically airs on Monday and Tuesday each week, the Tuesday show is moving to Wednesday, Nov. 5, because of the election, Kealy-Mayton said. The show’s Web site indicates it will air at 7 p.m. Central time.

Costume contestants were to design a couple’s outfit for a jive dance routine performance to the Jerry Lee Lewis tune, “Great Balls of Fire.” Kealy-Mayton drew her inspiration from a piano keyboard -- the image that Jerry Lee Lewis brings to her mind. Her flirty short halter dress features black and white “keyboard” front and back striping and fringe tied off with a big red bow on the scoop back. The man’s costume includes a 1950’s era black bowling shirt with the piano keyboard -encompassing swirl. Along with suggested fabrics, her entry included directions for the application of crystals galore.

The show’s costume designer and staff will turn Kealy-Mayton’s design into the garments the show contestants will actually wear onstage. She’s anxious to see how closely they’ll adhere to her designs, but just knowing thousands of people all over the U.S. not only will see her work, but also overwhelmingly voted for it, is a delight in itself.

Kealy-Mayton is equally proud of her alma mater and the instruction she received from Workman and others. She said as long as she can remember, she’s been interested in fashion design and the quality of the SIUC program drew her to Carbondale.

“It was a great choice for me,” she said. “The instructors are really good and it’s a wonderful program.”

She’s a 1992 graduate with a bachelor’s in fashion design. Her sister, Lori Wachtel, is currently a senior special education major at SIUC. Their parents, Dick and Carol Kealy, still live in Waterloo.

Kealy-Mayton moved to Texas after graduation for a job in the fashion industry. Economic problems led to downsizing and the designer and competitive dancer soon found herself giving dance lessons. Before long, she was creating sought-after glitzy dance costumes. That’s not surprising when one discovers that long ago she was designing glamorous, shimmery pageant dresses.

Now living in Allen, Texas, she’s the owner of Dancesport Designs (www.dancesportdesigns.com). She’ll typically be working on several dance dresses at the same time, each requiring about three months to complete.

“My dresses may have 3,000 crystals or more, all hand-set. It takes a long time to produce a custom costume,” she said. “I also do several fittings because the dresses must fit perfectly.”

What does this victory mean for Kealy-Mayton?

She’s not sure whether viewers will see her face or hear her name on next week’s show. But, as the winning designer, great exposure is certain to find its way to Kealy-Mayton and her work. Moreover, she said sometimes, it seems people don’t give as much credence to the designer next door, so to speak. But now, she’s hopeful that earning national acclaim will open doors, doors she’s anxious to walk through.

“I’m definitely open to other things,” she said. Characterizing her design style as “classy but conservative” rather than the trend of some designers toward “sexy, sexy,” she prefers a great fitting garment with “glitz and sparkle.”

“I think these kinds of ballroom designs could translate into a ready-to-wear line for high end department stores,” Kealy-Mayton said. “I think it’s a good look that hasn’t really been tapped into.”

But for now, Kealy-Mayton is happily swirling in a whirlwind of preparations for the excursion to Hollywood. 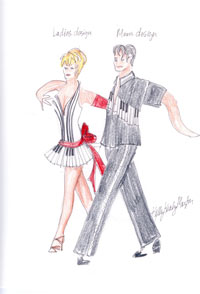