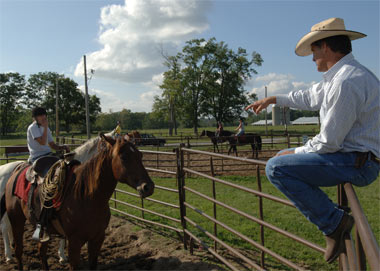 On the fence -- Mark W. Schwarm offers suggestions to a frustrated Karen M. Pospisek on getting a bay gelding to move away from the fence so she can halter him. A Southern Illinois University Carbondale senior from Downer’s Grove, Pospisek is taking Schwarm’s class in advanced horsemanship. (Photos by Jeff Garner) Download Photo Here

A senior in equine science at Southern Illinois University Carbondale, the 25-year-old Downer’s Grove native had been riding for 10 years. She’d even worked at a Wyoming “dude” ranch, for gosh sakes. Before she enrolled in this particular class, she thought she knew a bit about handling horses.

But now instructor Mark W. Schwarm wanted her to open the gate of a round, horse-training pen, go through and close it, all while sitting atop a horse -- an “opinionated” Arabian named Isis that didn’t like other horses. And there was another horse already in the pen.

Pospisek had an assignment much like this a few weeks before.

“I was using a halter -- no reins -- and I had a really hard time getting the horse to maneuver close to the gate,” she recalled.

“Mark left me to work on it the whole class period; I got so frustrated. I knew he wanted me to search for the answer and figure it out on my own, but I was really mad -- at myself and at him to a certain extent.

“I didn’t really learn anything until the next week when I had a different horse and he wanted me to take her into the concrete wash area. It took a bit to get her in there, and then she didn’t want to turn where I asked her to.

“I thought, ‘You know, it doesn’t matter. I will take my time, try to get that “smallest” response.’ That made a difference. Mark came up to me afterward and even before he could say anything, I said, ‘OK, last week is starting to make sense.’”

Taking time, allowing the search -- such “horse whispering” principles lie at the heart of a training method known in the business as “natural horsemanship,” which emphasizes empathy, communication, cooperation and partnership.

“You want to do the least it takes to get the smallest change (in behavior),” Schwarm tells his students.

“You get those little changes, then build on them, like stepping blocks. If you go ramming and jamming, they get nervous -- it just doesn’t work as well. We want our idea to become their idea, but we have to do it together.”

That day in September, Schwarm’s idea was that all the students would perform the gate task on horseback. But he had something extra in mind for Pospisek. The horse already in her round pen, a bay gelding named Butter, was wearing a saddle for only the second time in his life. He’d rolled on it once, trying to dislodge it. Now Schwarm wanted Pospisek not just to go through the gate, but to put a halter on Butter, all while riding Isis.

“I’d never haltered another horse on horseback before -- I had no clue as to how to go about doing it,” Pospisek said. “There was that first initial, ‘There’s no way I’m going to be able to do that,’ but you have to get past it -- you have to try.

“The first thing was getting in there and opening the gate -- don’t even think about trying to halter the horse.”

Her earlier efforts on those other horses paid off; it took awhile, but she finally got Isis through, closed the gate behind them and headed toward Butter.

“I needed to get close enough to touch him first, but that day, she didn’t want to be near him, which made it a whole lot more difficult for me,” Pospisek said.

“I tend to be a perfectionist when it comes to my riding -- I am trying to let go of that. I did start to get frustrated in the middle of it, but I was able to stop myself and keep working.”

Pospisek would get almost close enough to stroke Butter or scratch his neck, and Isis, a dominant mare, would assert herself.

“I had to redirect her enough to get her to leave him alone and still be in position to halter him,” Pospisek said.

“At one point, she drove him away because I didn’t have her positioned right. There are so many things you have to pay attention to. Just riding the horse isn’t enough.”

Butter wound up alongside the fence, near Schwarm. Her efforts to move him away failed.

“Mark let me know it wasn’t a good idea to drive him too much because then he would associate me and Isis as something to get away from,” Pospisek said.

When she finally got Butter off the fence, she didn’t manage to get as close to him as she had the first time around.

“I had to work at getting his attention, to turn his head toward me and to try to draw him in,” she said.

At last, she managed to drape the rope halter over his neck, then she quickly put it on.

“I think I kind of rushed putting the halter on because I didn’t want him to move off again,” she said.

“It was a shock to realize I could do it. Even with a bossy mare, I was able to control her and get that job done, though at the same time, I was a little critical of myself because I had to regroup. “

Schwarm takes such “regrouping” in stride, a calm acceptance that, among other things, he tries to impart to his students.

“When things go wrong, you just stop and start over,” he tells them.

“If you make a mistake, don’t worry about it. You will probably make another one. Just take care of it and go on.”

Holding her horses -- Coached by Mark
W. Schwarm during a class on advanced
horsemanship at Southern Illinois
University Carbondale, Karen M .
Pospisek manages to halter a bay
gelding, despite being mounted on an
"opinionated" mare. Pospisek hails from
Downer's Grove. Schwarm, owner of
Win-Thru Farm in Marion, has enrolled in
the University's equine science graduate
program and is teaching as a student
instructor. (Photos by Jeff Garner) Download Photo Here