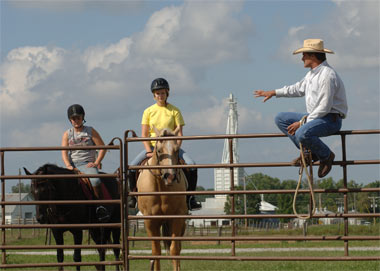 CARBONDALE, Ill. -- He doesn’t really whisper to the horses, he just has quiet conversations with them. And now Mark W. Schwarm is teaching that gentle art to a new generation of horse trainers at Southern Illinois University Carbondale.

Actually, Schwarm prefers to think of his students not as trainers but as horse “educators.”

“I have learned that working from the horse’s idea is much easier,” says Schwarm, a soft-spoken man, the owner of Win-Thru Farm and a brand-new graduate student in SIUC’s equine science program.

“I can’t make the horse do anything; I just let my idea become his idea. The more I have learned, the less I do, and the horse is just fine with that -- the horse just wants to get along.”

If you’ve been around the horse world much, you might recognize the “let my idea become his idea” phrase as one originated by the legendary Ray Hunt. A pioneer in the horse-handling method known as natural horsemanship, Hunt was one of a trio of horsemen who gave the author of the novel-turned-movie “The Horse Whisperer” an idea of what “whispering” was all about.

Schwarm, a former old-style horseman whose father and grandfather bred and trained racehorses, met Hunt in the early ‘90s at a horse clinic and gradually fell under the whispering spell. He went from what he calls “ramming and jamming” to trying to see things the way horses do.

“If you present something so they can understand it, they will help you get it done,” says Schwarm. “It’s not us dominating them or them walking all over us -- it’s just the two of us doing the job.”

These days, as a graduate student instructor, he’s trying to pass that knowledge on to SIUC students enrolled in his advanced horsemanship class, although, he claims, “The horses are the best teachers -- I just have opinions.”

Those opinions, the expertise underlying them and years of running his own horsemanship clinics make Schwarm a perfect fit for the equine science program, where the curriculum long has relied on the principles of natural horsemanship.

“Two weeks after classes began, I started having students come through the door telling me what a marvelous teacher he is and asking if we could keep him,” says Sheryl S. King, an animal science professor in the College of Agricultural Sciences who developed the program from scratch.

“They are learning so much. A whole new world is opening up for them, and they’re making breakthroughs they have never made before. I gave Mark a list of our horses and their problems, and I don’t think there’s a single horse on that list that has that problem any more. He’s gone through the entire herd and had the students fix them all.”

Melissa G. Gurga, a sophomore from Schaumberg, says Schwarm is “a great teacher…easy to talk to…always willing to share his experiences and just fun.”

Gurga’s no stranger to horses. She plays polo and rides with the University’s equestrian team. Still, after just a few weeks in Schwarm’s class, she began to change her approach.

“Before, I was more concerned about how I looked or what I was doing,” she wrote in an e-mail. “Now I know that I need to react with the horses and think with them. The horses will take care of themselves; they are just waiting for us to catch up.”

While Schwarm clearly excels as a teacher, becoming a student again, 18 years after he earned his bachelor’s at SIUC, has challenges beyond graduate-level statistics and finding a place to park.

“I worked for myself for a long time, and I found I was more set in my ways than I realized,” he says with a grin.

“And shaking off the cobwebs -- it’s pretty dusty up there in some areas. I thought it would be easy -- I know a lot about horses -- but it’s taking a little more than I expected. The time I have spent studying…”

He shakes his head. “I don’t know if I didn’t study enough when I was younger or just forgot, but there’s quite a lot of it.”

Still, he says, he loves teaching and is thrilled to be as old as he is and still learning. When the frustrations come, he can fall back on one of the things he tells his students as they struggle to let their ideas become their horses’ ideas.

“This may be the best day of your life -- you just don’t know it yet,” he says cheerfully.

“It’s not always sugar and cream -- there are things we have to learn from.”