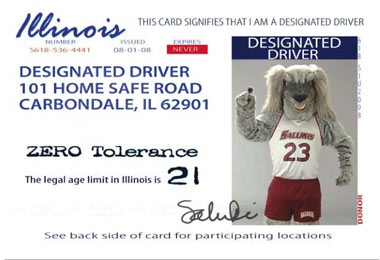 CARBONDALE, Ill. -- A normal morning. Twin brothers joking around as they sped down the road. In a moment, the world fell apart for their parents, Randy and Bonnie Arends. The car was going too fast. It ran off the road and struck a telephone pole. Greg Arends died. Steve was in critical condition. It was a parent’s worst nightmare.

It also stunned the high school the boys attended and the entire Gibson City community. Everyone knew Greg Arends was a good driver. But even a good driver can make a mistake, go a bit too fast. Steve’s recovery since the 2001 accident has been slow and he’s still not the same as he once was. Lucas Pulley saw the impact that wreck had on the school and the region. He realized it could happen again -- there or elsewhere. He and friends did something about it and now, Pulley is spearheading an effort at Southern Illinois University Carbondale to promote safe driving and improve pedestrian safety.

Project Ignition is a new Registered Student Organization at SIUC. According to Pulley, the success of Project Ignition in Gibson City and a national honor the program earned in 2005 convinced him it can be effective at SIUC too. There’s always a need for such a program on a college campus, organizers said.

Health education students Chris Emling, Amy Mathes and Sayword Edwards conducted a study in spring 2008 and found significant issues and numerous accidents involving several crosswalks in the University area. Project Ignition plans include various educational activities illustrating the dangers of driving after drinking or distracted driving, as well as the results of failure to practice crosswalk safety measures when driving, walking or biking.

A look at the Seat Belt Convincer, a wrecked car demonstrating the impact of a low-speed crash and how seat belts save lives, could be just what it takes to remind students to wear their seat belts. Navigating while wearing fatal vision goggles, simulating a blood alcohol level of .07 to .1, may be enough to make sure students don’t drink and drive. That’s what Project Ignition is all about -- helping students understand the risks and make safe choices.

“Lucas and the Project Ignition group have such a passion for what they’re doing,” said Michelle McLernon, outreach coordinator for the Wellness Center at the Student Health Center. The Wellness Center is providing the framework and support for the project but officials there are quick to say a lot of student volunteers who feel strongly and are working hard are what’s making the project a success.

“A driving accident has affected most of us at some point in our lives,” McLernon said.

Among the components of SIUC Project Ignition is a designated driver program. Resembling a driver’s license, the DD Dawg cards identify designated drivers and on the back, list participating restaurants and bars. Anyone with a card can present it at any of those places and enjoy free sodas or other incentives, as they remain sober so they can serve as a designated driver for friends. State Farm Insurance is a strong financial supporter. Mother’s Against Drunk Driving provided a $500 grant and the project also secured a $500 Do Something Plum Grant to fund designated driver cards and other initiatives.

The DD Dawg Program will officially launch at 7:30 p.m. Friday, Oct. 24, at the Student Health Center. Participants can enjoy free mocktails. Students can sign pledges to be designated drivers and get their DD Dawg cards. They can also learn more about Project Ignition. Those attending will also want to catch the Chicago Comedy Company’s enjoyable show with a positive message from 8 to 9 p.m. in the Student Health Center Auditorium.

In recognition of National Collegiate Alcohol Awareness Week, SIUC and Project Ignition have had a number of special events and displays this week. There have been alcohol screenings at various locations on campus, the Seat Belt Convincer has made the rounds, there was a fatal vision basketball shootout and presentations on collegiate alcohol use.

Pulley knew he wanted to do something to try to save lives after the tragedy in Gibson City. Then he heard State Farm had created Project Ignition and he and others jumped on the bandwagon.

When Pulley, a sophomore mechanical engineering major, arrived at SIUC, he saw a need for something like Project Ignition. Now, he’s helping make it happen.

“This is really a great program because the students really own it,” Pulley said. “That’s how we get success is from peer to peer interaction.”

“From the first time I met him, I found him to be a most remarkable young man,” said Mythili Rundblad, SIUC Student Development coordinator. “It’s so amazing to work with him. He demonstrates such initiative and leadership and enthusiasm.”

She noted that Project Ignition isn’t Pulley’s only effort to improve the world around him. He’s very active in the Saluki Volunteer Corps activities at SIUC. He also spent 10 days during the summer working in Tinca, Romania, helping the gypsies by designing and constructing a playground for a local orphanage, clearing trash and helping with a soccer camp for men and youth. Pulley characterized his trip as humbling and life changing and is planning another mission trip during Christmas break.

“Lucas is a fine young man and a great example of students taking leadership roles to address a cause. In this case, it happens to be driving safety. Out of a tragedy at his high school some good has come,” said Larry H. Dietz, vice chancellor for student affairs. “He’s one of our student stars and we’ve got lots of them out there.”

The sky’s the limit for SIUC’s Project Ignition, Pulley said.

“We can take it as far as our imagination can take us and as far as we’re motivated to go. And I’m very motivated,” Pulley said. “It’s just a safety onslaught. We want to try to change people’s behaviors where we can, and change the atmosphere where it helps. We want to make people aware. We want to save lives.”

For more information about the designated driver DD DAWG program or SIUC’s Project Ignition, contact the Wellness Center at 618/536-4441.