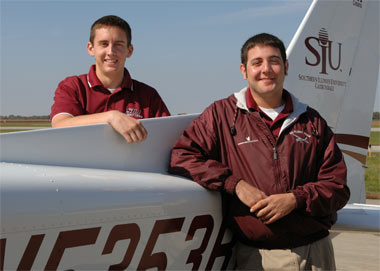 Leading the way -- Southern Illinois University Carbondale seniors Brian G. Clavenna, left, and Andrew A. Ross lead the Flying Salukis in the 2008 National Intercollegiate Flying Association Region VIII competition. Clavenna and Ross, both aviation management majors, are co-captains for the 18-member squad. The four-day event begins Wednesday, Oct. 29, at SIUC and nearby Southern Illinois Airport. The seven-time national champion Flying Salukis are competing against five other teams for a national championship appearance -- the 39th in 40 years. Clavenna is the son of Kay and Mark Clavenna of Spring, Texas; Ross is the son of Richard and Christina Ross of Bartlett. (Photo by Russell Bailey) Download Photo Here

CARBONDALE, Ill. -- With six national titles and a string of 38 national championship appearances in 39 years, the Southern Illinois University Carbondale Flying Salukis know a thing or two about preparation.

Work toward earning another berth in the National Intercollegiate Flying Association championships takes practice -- and plenty of it.

For the 18 Flying Saluki team members, the past two months meant practices that last an average of six hours Monday through Thursday nights. The practices range from flight practices at Southern Illinois Airport from about 4:30 p.m. to dusk, practice tests, review sessions and study nights, according to co-captains Brian G. Clavenna and Andrew A. Ross.

“It’s a pretty big commitment. We will come out on weekends and do navigation runs,” said Clavenna, a senior in aviation management, the son of Kay and Mark Clavenna, of Spring, Texas.

Done on a rotating basis, this is the first time since 2002 SIUC is hosting the competition. One might consider the Flying Salukis have a built-in advantage when they host the Region VIII competition, which starts Wednesday, Oct. 29. There are some logistical advantages, and Clavenna hopes familiarity with the area will particularly help some of the newer, younger team members in the flight events.

“The advantages are there, but it’s never really enough to be clear-cut when it comes times to get the awards,” said Ross, also a senior in aviation management, the son of Christina and Richard Ross, of Bartlett. “It’s always nice to have a pre-existing idea of what’s going on.”

“Now, not only are you surrounded constantly with all these different types of aviation activities, but you are reviewing for everything you are going to hit in your other courses,” he said. “It also gives you a really good work ethic and study ethic for any place you go.”

Clavenna also started flying lessons when he was 16 and got his license a year later. He likes the competition the Flying Salukis provide.

“It’s a school-sponsored event. It’s something to get out there and practice for and do well at,” he said.

There are nine returning members from year’s squad.

Because weather conditions could limit the number of flight events, how teams do in ground events is equally important.

Studying is intense. In the aircraft recognition, for example, competitors need to be familiar with any and all parts of civilian, commercial and military aircraft, including helicopters from throughout the world, dating back to around World War II. Success in that event lends itself to students who see it as a hobby, as well, said Mike Robertson. an assistant professor in the Department of Aviation Management and Flight.

“You have to start looking at planes when you are eight years old,” he said. “That’s an event that you just don’t study for.”

In another event, aircraft preflight, judges makes airplanes “as terribly unworthy as they possibly can,” and competitors have 15 minutes to find the problems, Ross said.

Ross and Clavenna like the navigation events, where the pilot and navigator work together to pass various checkpoints. Clavenna and Ross team together on two flying events --navigation and message drop; Clavenna is the pilot, Ross is navigator and drop master, respectively.

“Navigation is one of the more interesting events, especially when you go to other schools for competitions,” Clavenna said. “The routes take you out over the country and cities and you get away from the airport.”

In the message drop, competitors drop a six-inch by one-and-one-half inch rectangular piece of balsa wood with a streamer attached to it from 200 feet while flying at about 90 knots. The goal is to come closest to hitting 55-gallon drums at the end of the runway. Competition scores are based on the combined distance from two attempts.

Clavenna and Ross both said that the work needed to qualify for another run at nationals, the fourth-place finish in 2006 and missing the 2007 national championships provide motivation for the Flying Salukis.

“I think it’s all in the practices and what our team wants to do and how we get motivated,” Clavenna said. “Being seniors, we want to leave on a high note. We are looking to go to nationals again. First-place (in the region) would be nice, but that depends on how we do in our studies” for the ground events.