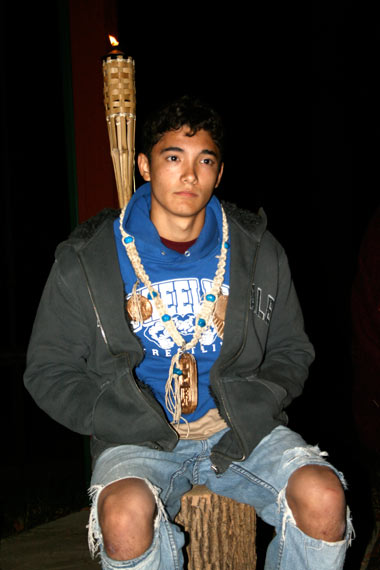 CARBONDALE, Ill. -- It was a very long and arduous three days. Sleep. What’s that? Food? A virtually unknown entity. There was no shortage of intense challenges for the mind and body however.

Ruby’s path to the top, he was quick to say, was strewn with ample difficulties but also some great camaraderie and a lot of fun. Exhaustion and frustration overtook him during the fire- starting challenge as the contestants tried their hand at orienteering to gather fire-starting tools. With a general lack of orienteering prowess evident, contest coordinators ultimately supplied flint and other tools to produce fire. No matches though, and the leading team got a time advantage.

Ruby didn’t win that challenge but he endured, getting an emotional boost when friends arrived for an encouraging visit. Their appearance coincided with the reward of a small portion of warming coffee. Somewhat rejuvenated, he fought on.

Each of the 19 competitors found themselves tested and tried. At Touch of Nature Environmental Center and various locales around the SIUC campus, they competed in challenge after challenge; many of the challenges encompassed multiple layers. For instance, during one challenge they swam to paddleboats, paddled to a boat dock, flipped heavy trailer tires to a spot where they had to solve a word scramble. They flipped the tires back and then grouped together to carry fellow teammates since only a few feet could touch the ground. That was just one of the difficult and yet rewarding challenges, organizers note.

“I’ve had e-mails and verbal contact with the contestants and they all say it was the experience of a lifetime,” said Sally Wright, assistant director of Recreational Sports and Services. “They were challenged to do things they never thought they could do and learned a lot about themselves.”

For Brandon A.M. Roach, the swimming challenge was the hardest part of the weekend. In the cold waters, he lost his goggles and found it impossible to see underwater. He certainly needed that ability to swim from one side of the pool to another and then surface to select eight of 12 available Egyptian symbols on tiles and put them in the same order they were underwater. But, he was a strong competitor. He won a kick bike. And, he garnered immunity conquering the balut challenge -- one of the most arduous culinary ordeals.

The balut challenge began with a special appetizer. The contestants got a tasty miniature Snickers bar. Covered in night crawlers. Yes, the giant worms. Then came the main course. Balut. It’s a “treat” for sure. This delicacy, made famous on the television version of “Survivor,” is a nearly developed duck fetus in the shell, hard-boiled for the contestants’ dining pleasure. Roach downed three balut in winning the challenge. Contestants said they were plenty hungry since there was little to eat all weekend, but not hungry enough to enjoy balut.

“I no longer take food for granted,” Ruby said.

For Tera Ashley Fredrick, holding gallons of water above her head in a long plastic container whilst standing in knee-deep water after dark was the toughest physical challenge. She and one teammate held on for quite some time against six remaining from the opposing team. She also said voting out Joe Janowiak Jr., who rounded out the final four, was the toughest mental stressor in the game.

She had entered the contest for the experience and because she knew it would give her a “great story to tell some day.” So, she was in it all the way, quickly learning that, “I can do just as well as any of the guys, and even better!”

As the weekend’s competitions were drawing to a close, Ruby hoped to help vote out the man he considered his strongest competitor. Indeed, it was curtains for valiant competitor Joe Janowiak Jr.

Then there were three. Brandon A.M. Roach, Tera Ashley Fredrick and Kevin Ruby faced the panel, comprised of the nine most recently voted off Ultimate Saluki Challenge contestants. Who would they choose as the winner? Roach suspected it wouldn’t be him.

“Going to the final tribal council, I knew I was getting third because to get there as a competitor, you have to form very shady alliances and even do a little backstabbing along the way,” Roach said. With the outcome determined by a vote of contestants and with no immunity challenge to save him, Roach said he knew he was done ‘because the jury members were all the ones I backstabbed.”

Fredrick was philosophical as she entered the Student Recreation Center for that final vote.

Ruby chose his answers carefully as he faced the jury panel.

“I was thinking how best to answer the questions to not offend anybody,” he said. “As they read the votes, I was just extremely nervous because it was neck and neck down to the end. But finally, at the end, it was just pure joy!”

Throughout the contest, participants earned a variety of prizes. As the 2008 Ultimate Saluki, Ruby’s prizes included a $500 book scholarship and two tickets and lodging for the Missouri Valley Conference basketball tournament in March 2009. Fredrick secured second place and Roach, as he suspected, got third. Along with prizes and rewards, the contestants experienced some less obvious positive impacts to their lives.

“This experience has made me grateful for the food I get everyday,” Fredrick said with a laugh. “Honestly though, I have experienced what only a small amount of people have and I will treasure that forever. My favorite part of the weekend was meeting a bunch of new people that I have become really good friends with. I loved all of the challenges that I had to overcome, too.”

Roach said the contest affected him in many ways, showing him how strong he was as he won events and performed well despite not eating or sleeping to speak of for three days. He enjoyed being a competitor and was pleased to make it to the finals, despite having a ‘bulls-eye” on his back as a strong, physical, standout contestant.

“It also taught me that a game like Survivor is about 80 percent mental and only 20 percent physical,” Roach said, noting that the chance to compete and try something new drew him to the contest. “I used to watch Fear Factor and Survivor and never thought I could do the eating challenges, but I won the challenge here, which was still disgusting. Overall, I had a great time and had the chance to experience what most people never will.”

“I learned how far I can really push myself and my body,” Ruby said. “I learned that I really am capable of doing these challenges. And, I definitely had a great bonding experience with everyone there.”

Mike Skupin, of CBS reality series “Survivor-Australia” fame, was on hand for the SIUC competition. The “real” Saluki dogs attended opening festivities too. All involved say the weekend was truly memorable.

“I can certainly attest that those who participated learned a great deal about themselves and certainly made a network of friends at SIUC,” said Lynne Thompson-Cundiff, assistant director of fitness for Recreational Sports and Services. “They will never forget this experience and they all said they were glad they participated. It’s very gratifying to see students really challenge themselves and realize that they have so much potential.”

Those competing to become the 2008 Ultimate Saluki, listed by hometown, were:

• Bartlett: Sean Christian Olsta, a senior majoring in radio-television. The son of Jim and Julia Olsta, he plans to complete his bachelor’s degree in May 2009 and go into the television news business.

Eboni Shavonne Mahone, a freshman with an undecided major. The daughter of Catherine Mahone and Charles Mahon, she’s considering a number of majors including forensic science and theater arts.

• Georgetown: Brandon Allen Michael Roach, a sophomore cinema/photography major. The son of Neil Roach and Suszanne Ingram, he plans to complete his degree and work in the film industry, writing, acting and directing.

• Harrisburg: Robbie Cochrum, a graduate student in kinesiology. The son of Loni and William Page, he earned a double undergraduate bachelor’s in exercise physiology and sports management and his goal is being an athletic team physician’s assistant.

• Lake Villa: Kevin Hennelly, a sophomore with an undecided major. Hennelly is the son of Steven and Julie Hennelly.

• Moline: Margaret Marziye Anderson, a junior forestry major. The daughter of Loren and Joyce Anderson, she plans to study abroad after completing her bachelor’s degree and then complete her master’s degree.

• Mt. Vernon/Chester: Jaclyn Smith, a graduate student in special education. Smith earned her bachelor’s in social work at SIUC and is now pursuing her master’s, ultimately hoping to be a headmaster at a prestigious private school.

• Naperville: Jason Alan Carey, a senior recreation major. The son of Mark and Sheila Carey, he ‘s also working on a minor in marketing and psychology. He anticipates earning his master’s at Clemson University and then becoming an air traffic controller. His goal is to eventually operate his own business.

• Newton: Ryan Bass, a junior majoring in agribusiness and economics. The son of Roger and Carole Bass, his goal is completing his bachelor’s degree and acquiring a job with a major agriculture company.

• Oak Lawn: Michael Wilson, a freshman with an undeclared major. The son of Mike and Kathy Wilson, he’s working on his bachelor’s in administration of justice and wants to then get involved with law enforcement/conservation as a game warden or police officer.

• Richton Park: Davie Lamont, a freshman administration of justice major. The son of LaRhonda Malone, he plans to complete his bachelor’s and then earn his master’s in accounting with hopes of working for the FBI.

• Schaumburg: Johnkyle Ratkovich, a freshman with an undeclared major. The son of Beatrice and John Ratkovich, he plans to earn bachelor’s and master’s degrees in a field of his choosing.

• Wheaton: Tera Ashley Fredrick, a freshman planning to major in food and nutrition. The daughter of Mike and Cathy Fredrick, she plans to complete her degree and secure an internship.

• Wheeling: Kevin Ruby, a freshman undeclared major. The son of Donald Ruby and Chantana Ruby, he hopes to enter the radiologic science program at SIUC.

• Woodridge: Joe Janowiak Jr., a senior aviation technologies major. The son of Joe and Patti Janowiak, he plans to complete his bachelor’s degree with specialization in advanced maintenance and license as airframe and powerplant mechanic in preparation for a career with a regional or commercial airline.

• Hampton: Christopher Oliver, a sophomore cinema and photography/cinema and radio-television: television production major with a classic civilization minor. The son of Jennifer Oliver and stepson of Jared Jordan, he intends to complete his degrees and then attend graduate school at SIUC or in California or Virginia Beach, with a career goal of working in the movie and television business, preferably as a director and/or producer.