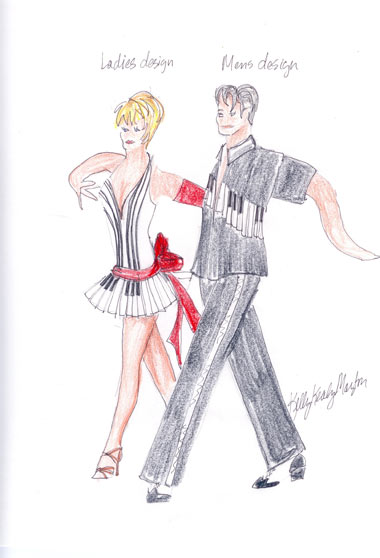 Inspired by piano keys, it’s an eye-catching black and white dress with bright red accents and corresponding man’s shirt and trousers. Contest competitors were to design male and female costumes that invoked visions of Jerry Lee Lewis’ “Great Balls of Fire.” Entries were due by Oct. 10 and Kealy-Mayton’s mother-in-law encouraged her talented daughter-in-law to enter. Ballots cast on the show’s Web site will determine the winner.

Kealy-Mayton said she assumed many people would be inspired to incorporate flames in their designs, so she wanted to do something different. As she pondered Jerry Lee Lewis and his music, piano keys kept coming to mind.

“I thought that was a perfect way to design for that song,” she said. That inspiration is obvious in her winning sketches.

A surprise phone call Friday morning brought the news that as a finalist, her costume designs will post on the popular ABC network’s show Web site this week. A 1992 graduate of SIUC with a bachelor’s in fashion design, Kealy-Mayton followed her dreams of working in the fashion design industry to Texas after graduation. But, recession hit the industry and she began giving dance lessons. That quickly evolved into designing dance costumes. She particularly loves working with fringe of all kinds.

Now residing in Allen, Texas, Kealy-Mayton retains strong Southern Illinois connections. Parents Dick and Carol Kealy reside in Waterloo. Sister Lori Wachtel is currently a senior at SIUC, majoring in special education. Kealy-Mayton speaks fondly of her time at the University, the education it provided her and of her Southern Illinois friends and roots.

“She is very talented,” said Jane E. Workman, fashion design and merchandising professor. She recalls that for the final exam, she had her students create a pattern and then fashion a garment in muslin on a short deadline. Kealy-Mayton went a step above and beyond, actually creating the garment in its intended fabric.

A “significant” number of entries from all over the country poured into contest headquarters for the dance costume contest, said Brett Harstein of LeadDog Marketing Group, the promotion agency running the ABC “Macy’s Design a Dance” costume design contest for ABC. He said the show’s costume designer actually selected the five finalist designs. Contest criteria include creativity, originality and relevance to the dance style.

Designs will remain under wraps until posting on the show’s Web site, www.abc.com/primetime/dancingwiththestars during the show Tuesday night, Oct. 21. The link to Kealy-Mayton’s design isn’t online until official opening of the contest, and indications are her design will bear labeling that it’s by Kelly from Allen, Tex. Online voting continues until 11:59 p.m. Friday night, Oct. 24.

The winner claims a trip for two to Los Angeles, Calif.. to attend a live taping of the “Dancing with the Stars” television show. That evening, the dance competitors will actually perform in costumes inspired by or based upon the winning costume design. It’s a prize valued at about $7,000 according to the contest rules. Runners-up get a “Dancing with the Stars” gift pack.

If Kealy-Mayton’s design comes out on top in the balloting, she said she’ll “be completely beside myself” with excitement. Regardless, she’s thrilled with her selection as a finalist and with the exposure she’s garnering through the contest.

“It’s really been a great year for us,” Kealy-Mayton said. She and husband Jim Mayton have a growing family including daughter Kealy, age 2, and one-year-old son Jay. She’s building her design business, DancesportDesigns, and working to set up her business Web site at www.dancesportdesigns.com. Moreover, it’s not the first time in 2008 a Kealy-Mayton design has been in the national spotlight.

She created a stunning purple dress from the components of 700 Sony Ericsson Z750 cellular phones this spring for a launch event for the phone. Tennis star Jelena Jankovic wore the promotional dress to the March Sony Ericsson Open Kick-off party. During an April media interview, Jankovic named its designer and called the dress, the first comprised of cellular phone parts, “quite delicate and quite a work of art really.”

Now, there’s only one thing that could make 2008 even better. Kealy-Mayton would love to be sitting in the audience Nov. 11 in Los Angeles as dancers strut their stuff onstage in the costumes she conceived.