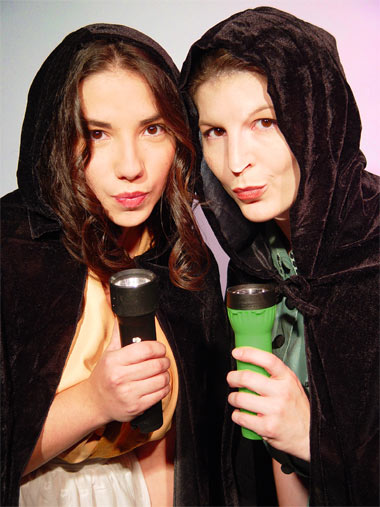 Searching for Love in Opera -- Leigh Ann Murdaugh, as Laetitia at left, and Danna Pantzke, as Miss Todd, set off a wild spree of crime in “The Old Maid and the Thief.” (Photo provided) Download Photo Here

Opera performance will be up close and personal

CARBONDALE, Ill. -- A combined effort of the School of Music and the Department of Theater at Southern Illinois University Carbondale brings an in-your-face opera presentation to the Christian H. Moe Theater Oct. 23-26.

The Moe Theater, located in the Communications Building, is a small, workshop type theater. Opera performances typically occur on a standard theater stage, with distance between the performers and the audience. The Moe Theater, however, does not provide for that much open space. This performance will see the audience within just a few feet of the stage.

“It’s a good healthy challenge to see if you are acting and performing well,” Paul Transue, music director for the performance and assistant professor in the School of Music, said. “It’s also a challenge for the theater students who are doing the lighting and the stage craft. They have to light the performance in close quarters and still leave room so the audience doesn’t feel crowded.”

The opera performance is “Searching for Love in Opera.” The main work is “The Old Maid and the Thief,” an opera by Italian-American composer Gian Carlo Menotti. The one-act opera, written in English, debuted on the radio in 1939. It is the story of an old woman who suffers unrequited love for a younger man. Her love prompts her to steal for him, but his rejection of her love leads to treachery.

Two performances precede “The Old Maid and the Thief.” The opera fest begins with scenes from “Don Pasquale,” a comic opera by Gaetano Donizetti. Like most comic operas, this one is full of mistaken or hidden identity and a wedding. The performance is in English.

Next up is “A Hand of Bridge,” a Samuel Barber opera, complete in about nine minutes. Each bridge player performs a monologue revealing his or her true thoughts -- and none of them is thinking about the card game. The cast is Landon Sutton as David, Sara Wiggins (Rushville), as Geraldine, Ricardo King (Tuskegee, Ala.) as Bill, and Kayley Fitt-Handzik (Lockport) as Sally.

Transue is music director for the entire performance. Jennifer Holcombe, visiting assistant professor in the Department of Theater, directs the performances. David Dillard, assistant professor of voice in the School of Music, directs the Don Pasquale scenes. Emma McCoy (Dixon) is the stage manager, theater Professor Ron Naversen designed the sets, Nicholas Jones (Warren) did the costumes and the lighting is by Bobbie Bonebrake (Oakland).

Performances are 7:30 p.m. on Oct. 23-25 with a matinee performance at 2 p.m. on Oct. 26. Tickets are $15 for general admission, $12 for senior citizens and $6 for students. Advance purchase is a good idea for this limited-seating performance. Tickets are available at the McLeod Theater Box Office in person or over the phone at 618/453-3001. The box office is open noon to 5:30 p.m. Monday through Friday and one hour before each performance. 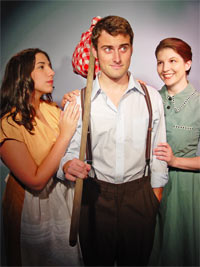