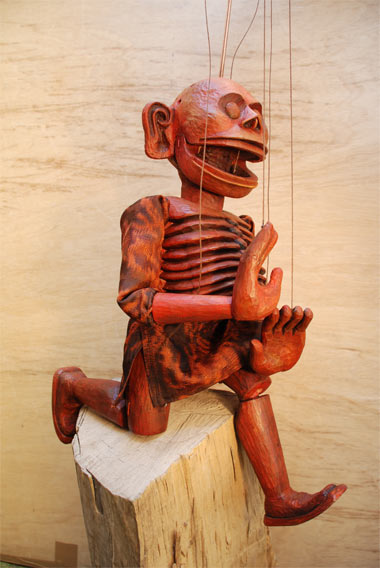 “Quenamican: The Place Where, Somehow, Life Goes On,” is coming to the McLeod Theater in the Communications Building at Southern Illinois University Carbondale at 7:30 p.m. Oct. 30. Ruiz created the puppets and the script for the show, which explores the rediscovery of pre-Hispanic gods and goddesses as well as what it’s like to be Mexican or bicultural in North America. He’ll perform the free show, open to the public, in Nahuatl, Spanish and English.

The star of the show is Mictlantecuhtli, a carved wooden marionette on wire depicting the god of the underworld. Co-starring is a life-size paper-mache puppet similar to a piñata, hand-crafted by Ruiz. The performance, including some recorded dialogue, begins in Nahuatl and Ruiz will then alternate between English and Spanish. Ruiz said his work draws heavily on the rich hybrid that is the Mexican culture.

“I draw upon the performance elements of Mexican culture, and the visual and material aspects of its representation and manipulation,” Ruiz said. He said his creations allow him to “articulate both age-old and contemporary expressions of the human experience.”

Ruiz is a guest artist in residence at SIUC the week of Oct. 27-31 and he’ll be working with the theater department, hosting a mask and puppetry workshop and presenting his personalized puppet show. He’s on the faculty at Pennsylvania State University at Altoona, Pa., where he’s an instructor of theater arts and resident scene designer. Ruiz earned his master’s in scenic design there and also holds a bachelor’s in graphic design from the Universidad Autonoma Metropolitana of Mexico, where his studies also included visual arts and industrial design.

Quenamican is one event on the Latino Heritage Month schedule at SIUC. Latino Heritage Month is officially Sept. 15 to Oct. 15, but activities at the University began Sept. 9 and continue through October. For more information about any of the events, contact Student Development at 618/453-5714 or check the Web site at www.stddev.siu.edu.