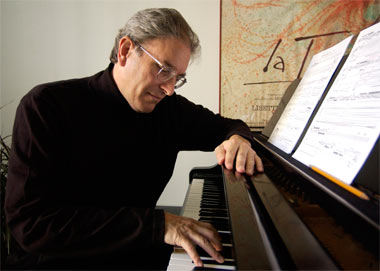 Winning national awards -- even for the 20th time -- hasn’t gotten old, but Stemper is often too busy to crow about it much. “When I was a student at Berkeley,” he said, “two of my teachers were honored after receiving 10 of these awards. So I thought it would be a good challenge to try to do the same thing. Unfortunately, I was too busy when I received my 10th and I forgot to tell anyone about it.”

The ASCAPlus Awards recognize professionals in the music business whose “main activity is outside of broadcast media.” Stemper’s specialty is modern art music -- not a form of music associated with the rock-n-roll lifestyle. In fact, Stemper pointed out, even some commercial jingles and television show theme songs get more airtime than art music. Stemper said the ASCAPlus awards recognize the cultural value of music apart from its commercial value. The awards are annual, meaning that each year for the past 20, Stemper has produced a significant body of work sufficient to merit ASCAP recognition.

This award year, Stemper finished the last of five visits to Chihuahua, Mexico as a guest composer. He worked with composers in Chihuahua and assisted in founding the city’s first contemporary music festival. The fifth visit saw the premiere of the Sinfonia Colibri, a commissioned work.

“Sinfonia Colibri is a huge piece, setting three poems of Nobel Prize-winning Mexican poet, Octavio Paz, to music,” Stemper said. “The music is meant to be a mixture of old and new sounds, using some traditional instruments and rhythmic patterns part of the time. Juxtaposing the classical and electric guitars was a lot of fun. I also tried to create musically the expanse of land, and the people’s reverence for it. And of course, religion.”

Other Stemper compositions premiered during SIUC’s Outside the Box festival last spring. And School of Music faculty member Junghwa Lee premiered a new piano piece, “Global Warning,” in Orleans, France, and performed it in her Carnegie Hall recital this year.

“Most people think it’s a misspelling,” Stemper said of the piano piece’s title. Far from it, he said – rather, it was an impassioned and even angry comment about “our leaders’ unwillingness to take the environmental problems seriously… Most of my life I was completely apolitical, but, through my music, I have become an activist of sorts.”

Stemper also traveled to Eastern Europe where one of his new works, “String Trio,” premiered in a live broadcast on Hungarian National Radio. Three other faculty members of the SIUC School of Music -- Michael Barta, Meng-Chung Chi and Eric Lenz -- performed the piece. After Hungary, Stemper went to Bucharest, Romania, where he appeared in the Sapamana Muzicii Contemporarne international music festival, first with SIUC School of Music faculty member Eric Mandat in a recital including Stemper’s “Three Pieces for Clarinet and Piano,” and “Blue”; then he performed his piano concerto, “Secrets of War,” with the Romanian Radio Orchestra.

Barta described the “String Trio” as “very challenging,” but noted that having the composer right here on campus was a bonus. “One rarely has the opportunity to work with the composer, make suggestions and get guidance at the same time... Our SIUC faculty trio feels honored to have a major work specifically written for us, and we felt that premiering it overseas was contributing to the good reputation of both Frank Stemper’s music and American contemporary music as a whole,” he said.

“As performers, we are often asked simply to play what’s on the page. With Frank’s piece, it was a collaboration between composer and performers, which is rare,” Chi said.

“There is always an interesting dialogue among the various instruments,” he said. “For me, this contrapuntal intrigue, along with the vivid instrumental colors, is the most distinctive features of Frank Stemper’s compositions.”

In addition to the ASCAPlus awards, Stemper has awards from the National Endowment for the Arts, Artist Fellowships from the Illinois Arts Council, a grant from the Rockefeller Foundation, and past composer-in-residencies in France, Austria, Romania and Mexico.

To learn more about Frank Stemper or to hear sound clips of some of his compositions, visit www.frankstemper.com.