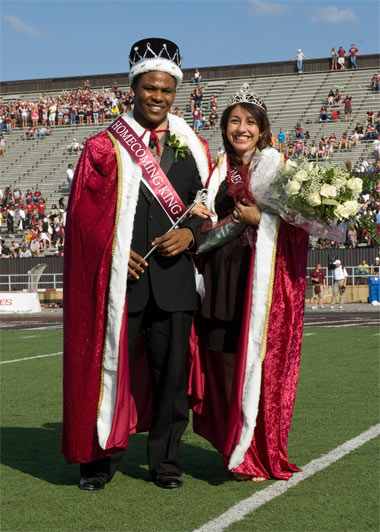 Arteaga, of Chicago, is a senior majoring in automotive technology with a minor in marketing. She is a senator for the Undergraduate Student Government and a member of Sigma Kappa sorority.

Turner, of Boutte, La., is a four- year member of the SIUC football team and is active in Alpha Phi Alpha. He’s a senior majoring in kinesiology.

• Kathleen Carmack, a junior from Villa Grove majoring in plant and soil science, specializing in agronomy. Carmack is a member of Sigma Alpha Agricultural Sorority and the COAS Ag-bassador team.

• Kristin Timken, a junior dietetics major from Waterloo. Timken holds a 4.0 cumulative GPA and is a member of Alpha Gamma Delta Sorority.

• Kevin J. Alves, a Springfield senior majoring in journalism. Alves is a member of the American Advertising Federation and Tau Kappa Epsilon fraternity.

• Justin Johnson of O’Fallon, a senior majoring in marketing. Johnson is a four-year recipient of the James E. Walker Scholarship and a member of Kappa Alpha Psi Fraternity.

• Mike Reiter, an accounting major and senior from St. Louis. Reiter is area coordinator of the Student Life Advisor Leadership Program and a member of Beta Theta Pi fraternity.

The 2008 SIUC Homecoming Parade winners include: