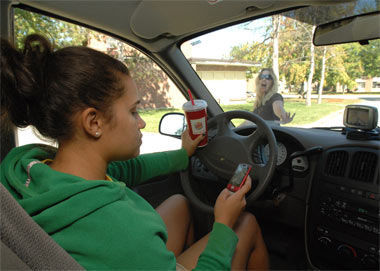 CARBONDALE, Ill. -- You’ve seen them on the road. They slow down, then speed up. They drift in their lanes, then sharply correct. They’re driving distracted, and distracted drivers are dangerous drivers.

“You only have 1.5 seconds between the time you perceive a hazard and the time you should be reacting to it,” says Dale O. Ritzel, who runs Southern Illinois University Carbondale’s driver education program for high school teachers and commercial driving instructors.

“If you’re not using good visual habits because you’re distracted, you have lost your perception time -- you can’t steer to the right or the left or stop.”

Reports from the National Highway Traffic Safety Administration used to link distracted drivers with 25 to 30 percent of the nation’s traffic accidents. In 2006, however, the agency reported that researchers at Virginia Tech Transportation Institute had evidence putting the number closer to 80 percent. The most common attention grabber: cell phones.

And drivers aren’t just talking -- they’re texting. A Nationwide Insurance survey of more than 1,500 drivers reported that nearly 40 percent of those responding said they text while at the wheel.

“They see it in the same category as talking, but if you think about it, it’s more like reading a paper or a book,” Ritzel said.

Drivers know the dangers of using cell phones while driving. In a poll of 600 Washington state residents conducted by PEMCO Insurance in 2004, drivers gave that behavior a four on a rating scale in which five represented the most hazardous. Yet, 58 percent of those same drivers said they used their cell phones in their cars anyway.

While the Virginia Tech researchers found cell phone usage the most common distraction, groping around in the car -- for a knob, a CD, a dropped item -- is the riskiest. Reaching for something increased by ninefold the odds of having an accident or just managing to avoid one -- something Ritzel knows about from experience.

“I had a son who totaled a car adjusting the radio,” Ritzel says.

“Fortunately, he had a seatbelt on and had no injuries.”

Today’s cars come readymade with on-board distractions -- everything from navigational systems to built-in DVD players -- in addition to the standard sound system, climate and vehicle controls. Then there are the more traditional in-car distractions: eating, drinking, smoking, grooming, daydreaming and having a fight with your significant other.

So what’s a conscientious driver to do to protect against wool-gatherers behind wheels?

“Give them room!” Ritzel says.

“If they’re behind you, let them pass -- move to the edge of the road to give them the opportunity. If you’re behind them, either pass or change lanes. If you can’t do that, drop back to increase your ‘following distance.’”

“You need to be aware of what people are doing in all directions,” Ritzel says.

“Keep your eyes moving to the sides and behind you. Anticipate what those drivers might do -- the person approaching quickly from the right might not stop -- and allow for it.”

Older drivers have the jump on younger ones in this respect.

“Experience helps us develop judgment so we know what our options are,” Ritzel says.

“If you get into that pattern of focusing straight ahead, you will tire more easily,” Ritzel notes.

Because fatigue is itself a distraction -- the Virginia Tech folks say drowsiness increases the risk of a crash or near-accident by at least a factor of four -- Ritzel stresses the importance of staying alert.

“It’s important to drive during the times you’re normally awake,” he says.

“For instance, it’s not wise for a person who is not a night owl to leave for Florida at 8 p.m. planning to drive all night to get there. And no matter when you’re driving, make frequent stops. If you get out and move around, you will be fresher.”