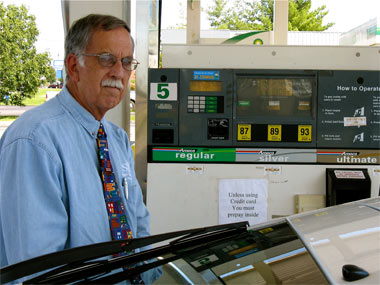 Gas sipper -- Dale O. Ritzel, whose Prius gets nearly 52 miles per gallon of gas, fuels up. While that kind of mileage comes only with hybrid cars, Ritzel says most drivers can make their gas go farther by changing their own behavior. (Photo by K.C. Jaehnig) Download Photo Here

CARBONDALE, Ill. -- You can’t force the price of fuel to fall, but you can get more “go” from the gas you buy.

Dale O. Ritzel, who runs Southern Illinois University Carbondale’s driver education program for high school teachers and commercial driving instructors, includes a section on fuel-efficient driving in one of his introductory courses. While buying a Prius or a four-cylinder jobbie will help out at the pump, adjusting your behavior can do the same thing, he says.

Ritzel’s No. 1 suggestion for scoring better mileage with the car you have: Avoid idling -- don’t keep the engine running at a railroad crossing, a convenience store or a drive-through.

“You get zero miles per gallon when you’re sitting still,” Ritzel says. “If you have to stop more than 30 seconds, turn off the engine.

“That may mean you’ll have to get out of the car (to pick up whatever you’re after), but you’ll get a little bit of exercise while you’re doing it. If you wear a pedometer like I do (to count the number of steps taken each day; fitness and diet experts recommend 10,000 steps daily), that helps you get your steps in.”

Cars have improved so much you no longer need to let them idle before setting out on a winter morning.

“In the so-called ‘olden days,’ you needed to warm up the engine to get it running, but now you can turn the key and drive right off, even on the coldest day of the year,” Ritzel says.

While idling is like pouring gas down the drain, you don’t save money by driving fast. Nearly everyone knows that driving 55 cuts fuel costs -- you’ll burn an extra 10 to 15 percent if you go just 10 miles per hour faster. Aggressive driving will cost you even more. Jackrabbit starts, lane hopping and screeching halts can cut fuel economy by as much as 20 percent, Ritzel says.

“Braking and accelerating both cause you to use more gas than maintaining a constant speed and using deceleration to slow down,” he notes.

“Time studies show that fast starts and weaving in and out of traffic don’t save much time, and components such as brakes and tires wear out faster with aggressive driving as well. If you anticipate traffic conditions and accelerate and decelerate gradually and smoothly, you will use less gas, reduce wear -- and be safer, too.”

“A ‘softer’ tire may mean a softer ride, but more of the tire touches the road, causing more friction, which takes more gas to turn the wheels,” Ritzel explains.

“When a tire is under-inflated by four or five psi (pounds per square inch) below the manufacturer’s recommended tire pressure, fuel consumption increases by 10 percent and over time causes a 15 percent reduction in tread life.”

Ritzel recommends buying a tire gauge and testing the pressure at least once a month, though weekly would be best.

“As the weather changes, pressure changes in the tire, so you need to do it regularly,” he says.

“With the radial tires we have today, you can’t tell if the pressure is down just by looking because they tend to bulge out. You need a gauge, and you should always use the same one.”

To get the most from your tire gauge, check the car manufacturer’s pressure recommendations (posted in the door frame) and take pressure readings before starting the car. If the tires need air, note how many pounds you need to add to get each one properly inflated, then take readings again at the air pump. Add the number of pounds you noted you needed during your first readings and inflate your tires to those levels. If you take readings only at the air pump, you won’t add enough because heat caused by the friction of driving there will make the air already in the tires expand.

The brand and grade of gas you buy don’t matter as much as the time of day you purchase it. Fill up first thing in the morning before the outside temperature begins to rise or late at night after it’s cooled off.

“Gas is at its densest when the temperature is cold, and consumers are charged based on volume, not density,” Ritzel says. “The cheapest grade is adequate in most cases, unless you have a high-performance engine (found in racing cars and those built for speed).”

High gas prices are here to stay. Following Ritzel’s tips may allow you to save enough money to buy a bike to go with them.