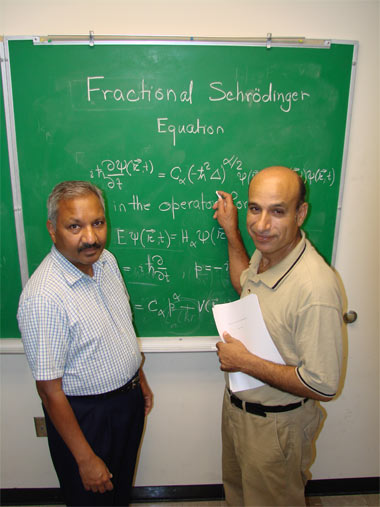 International cooperation -- Om Agrawal, professor in the Department of Mechanical Engineering and Energy Processes in the College of Engineering at Southern Illinois University Carbondale, left, and Sami Muslih, a professor of physics at Al-Azhar University in Gaza, work on mathematical equations recently at the Engineering Building on the SIUC campus. Muslih is one of 52 Fulbright Scholars working at the University this year, the highest number in recent memory. Agrawal and Muslih met at a conference in 2006 in Turkey and found they had many common interests. (Photo by Tim Crosby) Download Photo Here

CARBONDALE, Ill. -- Southern Illinois University Carbondale gets its fair share of Fulbright Scholars, but this fall it could be accused of being selfish.

This semester, the University is playing host to 52 Fulbright Scholars, including graduate students and faculty members. The foreign scholars represent 28 countries and are the largest such group on campus in recent memory, officials said.

The number is about 50 percent higher than the norm. In addition to the 36 continuing scholars, 16 new ones began their stays this fall.

Having the Fulbright Scholars around campus benefits SIUC and its students in many ways, said John Koropchak, vice chancellor for research and dean of the graduate school.

“The fact that we have such a large number of Fulbright Scholars may reflect a growing positive international reputation for our graduate programs,” Koropchak said. “It is certainly beneficial to the university to have these high quality students, targeted for leadership, attending the university. Our students, faculty, staff and the region also benefit from the opportunity to interact with people from other countries, especially in the increasingly international, flat world in which we live.”

The University will gather the Fulbright Scholars for a reception this weekend to welcome them and help them network with each other while they are here, said Carla E. Coppi, interim director of International Programs and Services.

Reporters, photographers and camera crews are welcome to attend the Fulbright Scholars reception, set for 3-5 p.m. Sunday, Sept. 21, at Stone Center on the SIUC campus. For more information, contact Coppi at 618/453-7661.

Coppi said the Fulbright Scholars visiting SIUC tend to be leaders in their home countries.

“They are the professionals with high level administration positions in government or their own university systems,” Coppi said. “They go through an extremely competitive, rigorous process to be considered for Fulbright scholarships. As a result, they are the crème de la crème and really something special.”

The Fulbright Foreign Student program is a major public diplomacy effort aimed at bringing citizens from other countries to the United States, where they can pursue master’s or doctoral degrees at U.S. universities and other institutions. About 1,800 new Fulbright Scholars begin their studies in various academic programs each year.

Prospective Fulbright Scholars must apply to the program through the Fulbright Commission and Foundation, or a U.S. Embassy in their country. The Institute of International Education coordinates their placement and supervises most of the scholars during their stay in the United States.

Coppi said the current group of scholars represents areas and countries that have typically been underrepresented in the past, such as Latin America, the Caribbean and African nations.

Another area represented this time around is Gaza, from which Sami Muslih, a professor of physics at Al-Azhar University, is visiting. Muslih will spend 10 months working closely with Om Agrawal, professor of mechanical engineering and energy processes in the College of Engineering.

Agrawal said he was aware of Muslih’s work in quantum and classical physics, and that it intersected with his own work in equations on fractional variation calculus. The two finally met at a conference in 2006 in Turkey and found they had many common interests.

“(Agrawal) has a mathematical theory and I can use this theory for many applications in many branches of physics,” Muslih said. “It is a very useful and powerful theory and solves many problems and opens the road to a new vision of physics.”

“It was a very competitive process,” he said.

But that wasn’t the only challenge he faced. Even after receiving the award, simply leaving Gaza proved difficult. The U.S. State Department gave him less than a day’s notice when the time came to leave. Soon, Muslih and his family -- wife and four children -- were traveling through Israel to Jordan, en route to the United States.

“The advantage of Fulbright is it is not a short visit of one or two months, “Muslih said. “This gives you time to improve your language skills and really experience the culture and exchange ideas with people. This is also good thing for my family.”

Agrawal and Muslih are working mainly on basic science research, using mathematical formulas and computer simulations to create charts and graphs that will help them better understand systems such as hydrogen-like atoms and how they function. Fulbright pays his living expenses while SIUC is providing office space and laboratory facilities. Muslih may also get the opportunity to teach and work with students while he is here.

He also is hoping to visit Chicago and network with other Fulbright Scholars during his appointment.

“I couldn’t feel that I’m a stranger here. I’m very at home because people are friendly,” he said. “You feel there is good culture here and you can live freely and exchange ideas freely.”

Other faculty Fulbright Scholars on campus this year include: