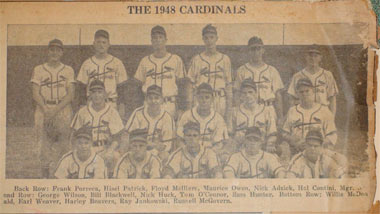 CARBONDALE, Ill. -- Lots of folks think professional baseball got its start in Southern Illinois when the Miners started playing in Marion last year. That’s not the case, however.

Back in the late ‘40s, Belleville, Centralia, Marion, Mattoon, Mt. Vernon and West Frankfort all fielded Class D minor league teams; in 1948, the West Frankfort Cardinals were even state champs.

Their stadium’s gone now. West Frankfort’s National Guard Armory hunkers down where the grounders used to roll, and most of the men who played there are dead and gone. But Toby J. Brooks, a kinesiologist at Southern Illinois University Carbondale, is determined their story won’t suffer a similar fate. He’s putting together a book whose working title, “Season of Change,” reflects not just the sudden shifts in the team’s fortunes but the demise of its town.

“It’s about the zenith of West Frankfort,” said Brooks, who grew up on a farm near Eddyville in Pope County and these days attends a church in West Frankfort.

“I’m a fan of sport literature, but I like stories, like ‘Friday Night Lights,’ that are about more than just sports. This is more of a social piece, not just about baseball and how the town rallied around its team but about the heyday of the coal industry and what happened when it dried up.”

Brooks, who served as an athletic trainer for the Miners last summer, discovered the earlier hometown team on opening day, after a speech in which he’d extolled the Marion club as the region’s first entrée into professional ball.

“A little old guy pulled me aside and said, ‘I appreciate what you had to say, but you are incorrect.’ He told me there were minor league teams in six cities. I’d grown up in Southern Illinois and didn’t know that -- I found it intriguing.”

He found it so intriguing that he began asking around and digging through old newspapers, where he made some surprising discoveries.

“In the late ‘40s, during the peak of the coal age, West Frankfort had a bigger population than Marion,” Brooks noted.

“It had a trolley and three movie theaters. There were housing booms and construction, because people were having trouble finding places to live. Money was flowing freely.

“They built the stadium in 1947; the team won the Illinois State League championship in 1948. But attendance started slipping. There was a big mine explosion in ’51. The team folded, the mine closed and the town shrank.

“I never knew it was such a hustling kind of place -- to drive through it now, you wouldn’t think that. It’s bittersweet to see how it’s fallen on hard times. I wasn’t going to do a book, but I fell in love with the story.”

His search also turned up some people with ties to the team.

“There’s a guy in my church who was a kid at the time and a vendor at the stadium,” Brooks said.

“He was able to tell me what game days were like.”

He found the old roster and managed to locate some of the old players, including former pitcher Floyd Melliere, who went on to play for the Omaha Cardinals.

“He was a really big help,” Brooks said.

“I’ve interviewed a lot of folks, and some of their stories are just remarkable. One of the players had scholarship offers to play football at the University of Arkansas, but he turned them down to join the service and fight in World War II. When he came back, he played minor league ball for years and then went on to get his Ph.D.

“These kinds of stories aren’t hard to find. These players were from that ‘Greatest Generation,’ and they did some incredible things, but their story hasn’t been told.”

That will begin to change Aug. 30, the 60th anniversary of the day the team won its championship. The Miners, dressed in replica uniforms, will play a “turn back the clock” game and Melliere, who pitched AAA ball before his retirement, will be in the stands.

Brooks, who is putting together a Web site (www.westfrankfortcardinals.com -- still largely under construction), has also approached some publishers about making the book available the old-fashioned way.

“If it gets published, that’s wonderful,” he said. “If not, I am enjoying writing it. At this point, it’s a labor of love.” 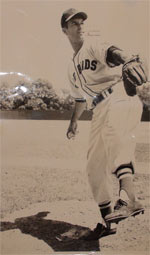 Pitch man -- A decades-old
photo depicts Floyd Melliere in
full Omaha Cardinals gear at
his place on the mound.
Melliere, who pitched for the
West Frankfort Cardinals the
year they won the Illinois State
League championship, has
proved to be a mine of
information for Southern Illinois
University Carbondale
kinesiologist Toby J. Brooks,
who is writing a book about the
club. Download Photo Here