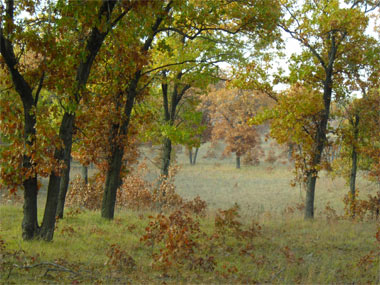 CARBONDALE, Ill. -- Flame plus cow usually equals nothing more than a tasty burger, but when it comes to saving one of the nation’s few remaining savannas, that combination might prove more than a value meal.

Research at the Kankakee Sands, a Nature Conservancy preserve straddling the Illinois- Indiana state line near Kankakee, suggests that burning and grazing could work together in maintaining black oak savanna ecosystems, which require a tricky balance of trees and grasslands to be at their best.

Funding for the work came from The Nature Conservancy, the U.S. Department of Agriculture and the Illinois Department of Natural Resources Wildlife Preservation Fund.

“Because of their open conditions, these areas are very rich in flowers and other vegetation, birds and animals, “ said John W. Groninger, who teaches in Southern Illinois University Carbondale’s forestry department and supervised the research.

“Without fire, they become overgrown with trees, which provide too much shade for other vegetation to grow. But we found that the areas that burned enough to maintain a somewhat open structure still had undergrowth coming in. It looks like grazing is the missing element.”

Covering roughly a third of the Kankakee Valley, the Kankakee Sands region is a legacy of the last ice age when floodwaters from prehistoric lakes left behind gravel and sand as they roared through. Swept by the wind, the sand formed dunes, which offered some protection to fast-sprouting, drought-tolerant black oaks springing up in the protected swales. Over time, this unusual blend of oak and grass became home to, among other species, redheaded woodpeckers, regal fritillary butterflies, plains pocket gophers, yellow wild indigo and orange fringed orchids, all of which nowadays struggle to survive.

“Savannas are like prairies with scattered trees,” said Cody D. Considine, a restoration ecologist with The Nature Conservancy, who is basing his master’s thesis on his research in this area.

“Because some species require savanna habitat, this area is critical for many unique plants and animals. Redheaded woodpeckers, for example, can’t live in closed canopy forests or open prairies. They need a mix of grassland and trees.”

Over the years, development and row crops have destroyed the once-plentiful savannas, reducing millions of acres throughout the Midwest to little more than a few thousand. The Kankakee Sands area contains the largest concentration of black oak savannas not just in the Midwest, but in the country. Maintaining what’s there and adding to it plays a crucial role in protecting the plants and wildlife that depend on this type of habitat.

Fire has always served as a key player in keeping these savannas relatively open. But too much fire harms more than it helps.

“The larger trees can survive, but younger trees are often killed,” Considine said. “Even if they can re-sprout, with frequent fires the saplings are unlikely to grow into trees.”

Considine decided to track the fire history of four sites in the Kankakee Sands by sectioning some tree trunks and analyzing their fire scars. That information would suggest how often managers could perform prescribed burns to maintain openness without killing the younger generation. His idea worked -- up to a point.

But there was a problem.

“Fire intervals of less than two years maintain the open structure but absolutely no regeneration takes place,” Considine said. “When all the larger trees die, you’d have a shrub prairie, not a savanna.

“But with intervals over three years, the savanna turns into forest. That’s where grazing comes in. We’re speculating that you wouldn’t have to burn as much to maintain that open structure while still regenerating trees.”

Grazing removes grass and other fuel that makes fire burn hotter, upping survival odds for the younger trees. Bison used to perform that task; cows could do it now.

“This was somewhat surprising to us, because with our background in forestry, we’re used to cattle being a destructive force as far as mature trees go,” Groninger said.

“But we’re learning that under certain conditions, they can play an important role in the regeneration process. If we can find ways of producing cattle under conditions that sustain natural areas, we could maintain both rural economies and preservation activities.”

Further research awaits funding and students with an interest in performing it.

But Considine, who plans to tie up the loose ends on his thesis in September, isn’t waiting. He and his fiancée have bought a tract of land near Dixon. They’ll be burning and running cows and learning how it all works out. 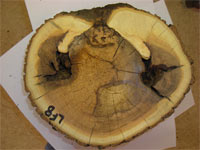