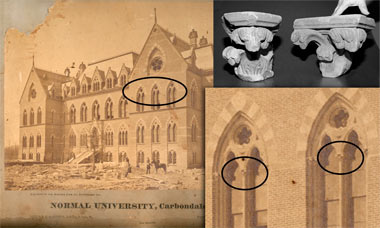 Original Building Pieces -- Southern Illinois University Carbondale began as Southern Illinois Normal University in 1874 with the opening of what was then its one and only building. This picture depicts the building’s construction. Herb Rieke of Dunlap is donating to SIUC’s Morris Library some of the original sandstone pieces that once flanked the windows of that building. The photo shows the pieces and their original location. Photo provided

CARBONDALE, Ill. -- It all began in 1874 in a rather ornate 215-foot by 109-foot, four-story building of Romanesque-Gothic architectural style. What then was Southern Illinois Normal University in its entirety cost $265,000 to erect. Less than a decade later, fire gutted the building, which had been built atop what had been a strawberry patch. They rebuilt on the original 20-acre plot, dubbing the replacement building Old Main. Through the years, other buildings sprang up as the small teacher’s college evolved into Southern Illinois University Carbondale.

The inaugural building on the Carbondale campus is long gone, as is Old Main, which replaced it until an arsonist’s flames consumed it in 1969. Herb Rieke of Dunlap has donated to Morris Library at SIUC some very special remnants of that very first building.

Rieke and his family resided in Carbondale in the 1930’s and 1940’s. Sometime after the turn of the century, his grandfather Joseph H. Davis, served as Murphysboro mayor. Davis received a variety of items from his constituents, including what are apparently some of the carved sandstone pieces that formed the tops of the columns of the Corinthian capitals that separated the arched windows on the second and third floors of that very first building. Now, those decorative sandstone carvings are once again on the Carbondale campus.

“Even as Old Main is fading in the memory of many alumni, we’re delighted to have these remnants of Old Main’s predecessor,” said David H. Carlson, dean of Library Affairs at SIUC.

The gift is notable aesthetically and historically.

According to Gail White, a founding member of the Carbondale architectural firm White and Borgognoni Architects, which specializes in historic preservation, the stone used in the construction reportedly came from a quarry located a few miles south of Carbondale.

“The source of the stone may have been the Boskeydell Quarry, which was also the source of stone used for the Baptist and the Presbyterian churches built in downtown Carbondale in the early 1900’s,” White said.

The 1878 “History of Jackson County, Illinois” proclaimed the first building at Southern Illinois Normal University “in no respect inferior to any other edifice of its kind in the United States.”

Plans call for eventual display of the sandstone pieces in Morris Library, currently in the midst of a massive expansion and renovation project.