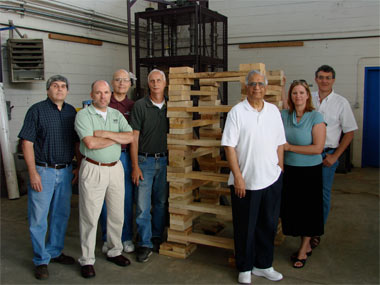 New support system for mines -- Yoginder Paul Chugh, center, professor of mining and mineral resources engineering at Southern Illinois University Carbondale, stands near a demonstration of a new mine support system he and others helped design that offers stronger, lighter and better air circulation characteristics than traditional 6-inch by 6-inch cribbing timbers. The new system, called Atlas Cribs, is being tested in several mines in the area and local saw mills are fielding proposals to make the specially designed braces under license.

CARBONDALE, Ill. -- Working in coal mines can be backbreaking labor, not to mention dangerous. But a new technology invented by researchers at Southern Illinois University Carbondale will make it easier for miners to ensure their safety as they brace the roofs of mine shafts.

The new method involves simple, but specially designed stackable wood braces that are lighter and stronger than conventional wooden blocks used by miners for centuries. Yoginder Paul Chugh, professor of mining and mineral resources engineering in the SIUC College of Engineering, devised the materials, with the help of several others.

The technology, which several area mines are testing, represents a major improvement over bracing and cribbing methods used by miners for more than 200 years, even though it utilizes the same materials and builds on the same concepts involved. If all goes as planned, the new technology will mean more jobs for Southern Illinois, where some lumber yards already are experimenting with manufacturing the devices.

The new braces, called Atlas Cribs, are comprised of a mix of hardwoods and include a main lateral element made from a board with shorter boards nailed on both sides at both ends. The engineered braces hold many advantages over current methods for bracing roofs and seals.

First, Atlas Cribs are much lighter than the traditional 6-inch square blocks of wood miners use now, making it easier for the miners to handle and stack them. Also, the wood grain orientation in the braces make them stronger than the traditional methods. The new brace design also makes it easier to circulate air around the cribs, which could cut down on one of a mine’s biggest operating costs -- circulating fresh air.

“Air has to circulate in a mine to dilute the methane gases and provide fresh air (to breathe),” Chugh explained. “Moving air through a mine is the second largest energy consumer for a mine, next only to the transportation of coal out of the mine. That’s a pretty substantial amount of energy you’re spending on moving air.”

The new cribbing system takes up 41 percent less area than existing ones and may be up to 50 percent more efficient in terms of airflow, Chugh said.

The system’s strength comes from several design factors. First, the contact areas -- the area where the braces touch each other and the load is actually borne -- are equivalent to the traditional systems. This area is about 6 inches square.

Also, the shorter boards that are nailed to both sides of both ends of the lateral board are cut and positioned so that their grain runs vertically between the roof above and the floor of the mine. This axial grain orientation is much stronger than a parallel one.

“When you compress wood in a parallel direction it is very, very soft,” Chugh said. “So our central element has parallel grains, but the grain on the end pieces are axial to the load, and the strength of wood in this direction is about four times larger.”

The lighter weight also means lighter work for the miners charged with building the cribs. Several former miners -- Bill Bell, Harrold Gurley and John Pulliam -- worked with Chugh on the design, with that perspective in mind. The new braces weigh 18 pounds, about half what a traditional cribbing timber weighs, meaning they can also work faster.

“Sometimes miners have to carry the timbers a couple of hundred feet before stacking them,” Chugh said. “So this will be easier on their backs.”

The braces are made from readily available hardwoods including oak, sycamore, poplar and hickory. They come in several sizes -- Atlas 100, 200 and 300 -- with various numbers of contact areas that allow for different cribbing configurations depending on the situation. A six-point configuration, for example, will carry 195 tons while a nine-point one would take about 300 tons of load.

Chugh began working on the concept about one year ago, after experimenting with a brace made from manufactured wood products, such as plywood. The economics of that concept did not work out, and driving back from a meeting in Harrisburg, Pa., the idea for an engineered natural hardwood brace took hold.

“I told the team to stop the car, I had an idea here,” Chugh recalled. A year later, several mines are either testing or plan to test the method this summer, he said, using it to brace mine seals, which are critical stability points. At the same time, several local sawmills also are putting in bids to manufacture the braces, which they could then sell under license to mines throughout the Midwest.

“One local mining company uses 400,000 of these each year,” Chugh said. “The total demand within Illinois, Indiana and western Kentucky is about 1.5 million a year.”

The initial price the University will provide to the mines is about 3 cents cheaper per brace than the current method. 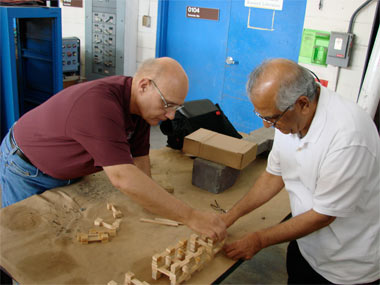 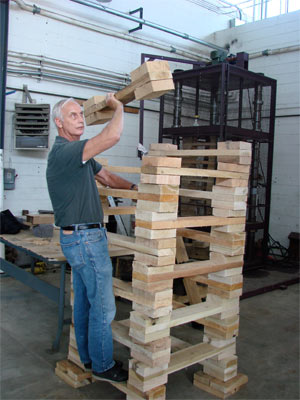