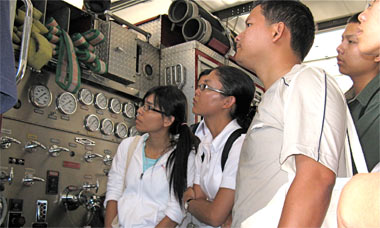 A closer look – Nineteen students from Burma, Cambodia and Vietnam are at Southern Illinois University Carbondale in July for an intensive, month-long program that introduces them to American culture, daily life and government. Here, the students check out the equipment on a Carbondale fire engine.

CARBONDALE, Ill. -- Students from Southeast Asia are at Southern Illinois University Carbondale this summer for the Study of the U. S. Institute for Student Leaders, an intensive program that introduces them to American life with a focus on learning about our political system and the daily life of American citizens.

This is the 12th summer that the University has hosted the Summer Institute. SIUC is one of just seven universities in the country involved in this U.S. Department of State program. The Branch for the Study of the United States, through the Office of Academic Exchange Programs, sponsors the Summer Institute. The Bureau of Educational and Cultural Affairs selects students each year based on their potential to assume leadership positions in their own countries. John S. Jackson, visiting professor through the Paul Simon Public Policy Institute, played a large part in bringing the Summer Institute to SIUC in 1991, and he remains a co-director. However, he credits John L. Foster, associate professor of political science and the current Summer Institute director, with developing the program into the multi-faceted American experience it is today.

Nineteen students from Myanmar (Burma), Cambodia and Vietnam arrived on June 29 to begin the month-long visit. Their agenda includes a rigorous round of lectures, discussions and presentations as well as cultural events here in Southern Illinois and in Springfield, St. Louis and Chicago.

Reporters, camera crews and photographers may cover some of the activities on the schedule during the students’ stay in Carbondale. Students may also be available for interviews. Log onto www.siu.edu/~institute/ for a schedule overview, and contact John L. Foster, associate professor in the political science department and the institute director, at 618/453-3175 or jlfoster@siu.edu for more information.

The students are studying such issues as the role of the media in politics, immigration and diversity, interpretation of First Amendment rights, the presidential campaign, and the legal system. They will meet with Illinois political figures, visit the federal courthouse in East St. Louis, volunteer at the Carbondale Boys and Girls Club and Senior Center, and attend a meeting of the Carbondale City Council as well as participate in a United Nations simulation. They may also attend Sunset Concerts and participate in side-trips to such destinations as Giant City State Park and Fort de Chartres.

“We’re the heartland,” Jackson said, explaining the appeal to the Department of State in sending students to a Midwestern university. “If you see the Midwest, you see a part of the United States many people don’t see.”

Jackson noted that the students also visit Springfield, including Abraham Lincoln historical sites not included on the itinerary of students at other universities.

“Lincoln is a universally popular icon,” he said, noting that many of the students have some familiarity with Lincoln.

“The ultimate goal is to increase intercultural understanding,” Jackson said. He added that he and Foster stay in touch with some of the students who attended the Summer Institute. Some have returned to the United States -- some to SIUC -- for graduate school. Others are leaders in their own countries now.

“(Involvement in this program) gives something of a feel of how America looks to others,” Foster said, noting that seeing the United States through fresh eyes sometimes helps combat the cynicism that may come with a close examination of the government.

Foster said introducing students to aspects of American culture and politics opens doors to new experiences for him as well, making it a learning as well as a teaching experience. By way of example, he referred to institute co-director Barbara L. Brown’s recommendation of a little-known politician in 1997 as a speaker for the group.

“I remember she said, ‘He’s a bright young man, he might go some place.’ That was Barack Obama,” Foster said. “So I got to meet him when nobody really knew who he was. And David Axelrod, his campaign manager, came here and talked to the students about how to run a presidential campaign. I’ve been to a lot of places and met people I never would have met but for this program.”

Nguyen Lan Hiiong, an international economics major from Hanoi, Vietnam, said she enjoys the wildlife so prevalent in the Carbondale area and on campus. She tried to take pictures of squirrels and rabbits but the creatures, however charming, seem disinclined to sit still long enough.

“This is a nice place to learn,” she said, referring to the campus. She said the question of why she chose to participate in the program is “an easy one -- we can see the United States with our own eyes. I’m interested in seeing American families -- people, not just the government. I also want to see the museums, historical sites, and natural beauty. I want to see everything.”

Vutha Samrith Kuch, a double major in economics and law from Cambodia, is from a rural area, so he feels at home in Carbondale. He is the first in his family to attend a university -- he received a scholarship to one of his country’s most prestigious schools.

“I want to know more about American people,” he said, noting that so far he finds Americans to be very friendly.

“American education is the best in the world,” he said, adding that he hopes to return to the United States for graduate school.

Naw Ocean Rene Newline is from Rangoon in Burma. Not only is she a double major, but she also attends two universities. She is physics major but also participates in a liberal arts program in which she is majoring in English and earning a minor in Chinese. She also studies religion as part of the program. She said two of her professors are from Chicago and they encouraged her to come to the United States.

“I would like to know more about American culture, and democracy and the freedoms,” she said.

This week the students attend the Carbondale City Council meeting, volunteer in Carbondale and spend time with American families in Randolph County. Next week’s highlights include visits to St. Genevieve and Prairie du Rocher.