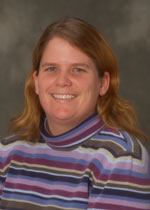 CARBONDALE, Ill. -- Kathryn A. Hytten, associate professor in the Department of Educational Administration and Higher Education at Southern Illinois University Carbondale, took over as interim chair of that department June 16. She replaces W. Bradley Colwell, who has moved up to associate dean of academic and student affairs in SIUC’s College of Education and Human Services.

“Kathy is well-respected in her department and throughout the college as an outstanding scholar and teacher,” said Dean Kenneth Teitelbaum in announcing the appointment.

“She will bring a thoughtful and collaborative approach to the position and a level of energy and commitment that will greatly help the department during this transition period.”

Hytten will serve as interim chair over the next academic year while the college conducts a national search for Colwell’s replacement. Teitelbaum hopes to have a permanent chair in place by the beginning of the 2009-10 academic year.

Hytten is president-elect of the American Educational Studies Association, an international society of students, teachers, scholars and administrators who view the liberal arts as the foundation of education. She assumes the presidency next year.

A faculty member in education since 1996, Hytten has a cross-appointment in women’s studies. She teaches courses touching on culture, ethics, social justice and social forces, philosophy and critical ethnography as they pertain to education and has written a book and several book chapters as well as more than a score of articles for professional journals.

Hytten’s professional memberships include the American Educational Research Association, the International Network of Philosophers of Education and the John Dewey Society.

A New York native who grew up in Vermont, she earned her bachelor’s degree in 1989 from Colgate University in Hamilton, N.Y. She completed her doctorate in 1996 at the University of North Carolina-Chapel Hill.