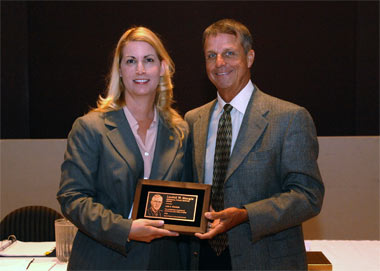 CARBONDALE, Ill. -- A woman with years of service both inside and outside Southern Illinois University Carbondale is the winner of this year’s Lindell W. Sturgis Public Service Award.

Julia A. Wetstein, assistant dean in the College of Science at SIUC, received this year’s award during the SIU Board of Trustees meeting today (June 12) in Carbondale. Wetstein, an SIUC alumna, receives a cash award, plaque and a reserved parking space for one year. Board of trustees members, SIU President Glenn Poshard, other campus leaders and past award winners honored Wetstein at a luncheon following today’s board meeting.

Established in 1979, the Sturgis award honors SIUC employees who contribute to their community, the area, state or nation. Sturgis was a member of the SIU Board of Trustees from 1949 to 1951, and again from 1953 to 1971. A Metropolis native, he served as chairman of the board of trustees from 1969 until his retirement.

Those nominating Wetstein for the award pointed to her dedication to many community groups and causes, as well as her service to the University. Along with her 17 years of service to the University, Wetstein also has served in various roles with the Boys & Girls Club of Carbondale, United Methodist Children’s Home Foundation, the First United Methodist Church of Carbondale, Rotary International, the Southern Illinois Chamber Music Society, Habitat for Humanity and the Carbondale Chamber of Commerce’s Southern Illinois Ethnic Festival.

“(Wetstein) is not only involved as a volunteer, but in each of the organizations she has worked with she has taken on a leadership role serving on boards, leadership panels and as director of capital campaigns and other fund-raising activities,” wrote Jay C. Means, dean of the College of Science at SIUC, and one of several local leaders to nominate Wetstein for the award. “In each of these roles she has shown qualities of selfless energy, innovation, creativity and persistence in achieving community goals that have bettered the community at large, but also improved the lives of many children and young adults in the community.”

Wetstein said in many cases, the people already involved in the causes drew her into service.

“Most of the things I’ve done happened because people I respect and admire came to me and asked, said I was needed, and asked me to perform specific roles,” Wetstein said. “If they needed expertise in fund-raising, for instance, they might come to me to put something together. Then the more I would get involved, the more I understood why these efforts were so important.”

A prime example is Wetstein’s involvement with the Boys & Girls Club of Carbondale, which she helped found as an early board member, later serving a two-year term as board president.

“When I got involved, I had no intention -- no intention -- of becoming board president,” Wetstein she said with a laugh. “I don’t have any kids, and I really don’t anything about working with younger kids. But as we started the club, and I would see 120 kids there after school, I started to think about where these kids would go if they didn’t have a club. As with many things I get involved with, I have initial reasons and it just expands from there. It just evolves.”

Kathleen Fralish, current president of the Boys & Girls Club of Carbondale, acknowledged Wetstein’s many contributions to the organization in a letter supporting her nomination for the Sturgis award.

“She worked tirelessly… to accomplish the opening of club in September 2004,” wrote Fralish. “She continues to provide wisdom, energy and time as we develop new programs in support of our young members.

“Julia is remarkable in that she is willing to do almost anything that contributes to the organizations to which she is committed,” Fralish wrote.

A native of Carmi, Wetstein began her long association with SIUC in 1981, when she became a freshman. After graduating with an undergraduate degree in theater, she earned a Master’s of Business Administration in 1991, the same year she went to work as a major gifts officer for the SIU Foundation. In 1997, she became assistant dean in the College of Agricultural Sciences, remaining in that position until last year, when she became assistant dean in the College of Science. She currently is working on a second master’s degree in economics.

Her financial sensibilities have paid major dividends for the local groups with which she allies herself. As a board member of the United Methodist Children’s Home in Mount Vernon, Wetstein led the effort that raised $800,000 for a chapel and youth services building. She also acted as chair for the capital campaign at Carbondale’s First United Methodist Church, which raised $1.5 million for a major building expansion there. She also has acted as a fund-raising adviser for the Southern Illinois Chamber Music Society.

As a member of the Rotary International and the Rotary Club of Carbondale, Wetstein served as a member of the Group Study Exchange, as well as its coordinator, helping plan and give tours to Rotary members visiting the area. Harry Henderson of Sparta, Rotary district governor, said Wetstein was chosen for the team he led at the time because of her status as a young professional who could positively represent Southern Illinois.

“I believe Julia Wetstein exemplifies Rotary International’s motto, ‘Service Above Self,’” Henderson wrote in his nominating letter. “I am proud to know her and to recommend her for this award.”

Wetstein said she was extremely humbled to be considered for the award, let alone win it.

“I didn’t know anyone nominated me until (Interim Chancellor) Sam Goldman called me one day recently and asked me if I was sitting down,” she recalled. “I know it’s a huge honor. To be among the caliber of people who have been given this award in the past is a great thrill.”