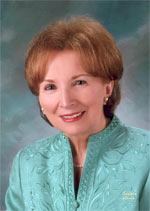 CARBONDALE, Ill. -- Marianne Webb, Distinguished University Organist and a professor of music at Southern Illinois University Carbondale, will accept the Edward A. Hansen Leadership Award from the American Guild of Organists at its national convention on June 25 in Minneapolis.

The award, named for a distinguished past president, is given biennially to an individual with proven “outstanding leadership in the AGO.” Webb receives the award because of her “stellar career as a concert artist and distinguished teacher, and in gratitude for her lifetime of leadership, devoted service and extraordinary generosity to the AGO.”

Webb’s accomplishments as a musician often directly benefit others, as well. Throughout her career, she reached out to include others in her success. This is especially notable in her career as a teacher, and the beneficiary was often SIUC. Webb joined the School of Music here in 1965, building an organ program and establishing the nationally acclaimed SIUC Organ Festival (1966-1980) -- which AGO states was the first of its kind in the country. She also helped establish an endowed organ recital series at SIUC. Webb designed the 58-rank Reuter pipe organ installed at Shryock Auditorium in 1969. The University named the organ in her honor in 2001. A special collection in the University Archives in Morris Library will eventually include all of Webb’s professional books, papers, music and recordings.

Even during the establishment of a prestigious recital series or the designing of a huge musical instrument, Webb remembered young organists at the beginning of their careers. She held workshops, master classes and seminars and she served as juror at distinguished competitions, including AGO national and regional competitions. Webb explained that with music, the teacher-student relationship is a crucial part of the learning process. She said, “In the world of music, our knowledge and understanding of the various composer’s performance practices have been handed down through the centuries, from teachers to students. During my career, it way my great privilege to study with Master Teachers from whom I learned much. Early on, I realized that teaching was just as important to me as performing. It was important to continue to hand down what I had been given, to keep the cycle of knowledge going. This is the Legacy of Music.”

SIUC recognized her contributions in 2005 with the University Distinguished Service Award.

Besides her role as a teacher, Webb has a distinguished career as a performer. She toured the United States and Europe, playing in particular for AGO-affiliated venues, including churches and colleges, but also at national and regional AGO conventions where the best organists in the country gather, and for such organizations as the National Convention of Sigma Alpha Iota International Music Fraternity. A loyal member of the organist guild, Webb also served AGO as a committee member for educational resources, chapter development, chapter support and membership development. Webb re-established the Southern Illinois AGO Chapter in 1983. More recently, she founded the AGO St. Cecilia Recital series.

In addition, Webb’s recordings appear with the Pro Organo and Pleiades labels. She was featured on the syndicated radio program “Pipedreams,” as well.

Before she came to SIUC, Webb was on the music faculty at Iowa State University and at James Madison University.

“I have always felt that it was important to serve others,” she said. “This award recognizes service and honors it. At the National Convention, I will accept the award for all of us in the profession who have given a lifetime of service to the American Guild of Organists.”

The American Guild of Organists is the national professional association for organists and those in the choral music fields. For more than 100 years, the guild has been an educational and service organization, seeking to preserve the history of the organ even as it promotes new opportunities for organ and choral music. There are more than 20,000 members of the guild and more than 340 local chapters. The American Organist Magazine is the official publication.