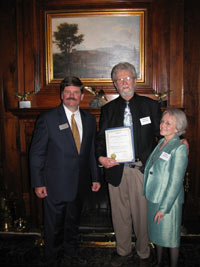 CARBONDALE, Ill. -- An architect. An associate professor. An historian. A man with a passion for Southern Illinois and its people- past, present and future. Robert H. Swenson, a faculty member at Southern Illinois University Carbondale, is all this and more. And his enthusiasm and efforts on behalf of Illinois, particularly Southern Illinois, recently made him a natural choice for the Illinois State Historical Society's Lifetime Achievement Award.

John Weck, president of the ISHS, presented the award to Swenson, whose wife Karen accompanied him, during ceremonies April 26 at the Executive Mansion in Springfield. The ISHS recognized Swenson along with a number of museums, historical societies, teachers, authors and others for their efforts to interpret, preserve and promote the state's history.

Swenson has made in many ways "an indelible mark on Illinois and its efforts to preserve and interpret its diverse history," according to Russell Lewis, secretary of the ISHS and chair of the society's annual awards committee. He praised Swenson's work with SIUC's Preservation Summer, which partners University students with communities, local residents and other SIUC faculty and staff to identify, research and help preserve historic architectural sites. In addition, he noted Swenson's work at various historical locales throughout the state, including barns, churches, flatboats, steamboats, ironclads and more.

"Most importantly, (Swenson) has groomed a cadre of students who have become lifelong practitioners and supporters of architectural and historic preservation projects, leaving the future of Illinois in very good hands," Lewis added.

Ironically, the man who was honored for doing so much to preserve Illinois' past was actually in Springfield intending to watch an award be bestowed on his good friend and colleague, Michael C. Batinski, chair of the SIUC history department. Instead, recognition went to Swenson because of Batinski's nomination.

"Swenson has been able to build bridges not only across academic disciplines -- history, archaeology, and architecture -- but also between the University and surrounding communities," Batinski wrote in his letter nominating Swenson for the award. "If this is an important ingredient in public history, Swenson has achieved that end with spectacular results. Not only does he train future professionals, he makes this project truly public."

Batinski praised Swenson for his work and its significance to the region. "His work has earned a reputation in the region so that it has been reported in the local newspapers and on regional television. His projects have received support from the Library of Congress and the Heritage Conservation Network. Finally, it is the less tangible but perhaps more important support of the community that moves me to make this nomination. Let me also add that Swenson has also made significant contributions to preserving the region's historic memory."

Swenson, in his typical low-key manner, called the award "a shock" and credited all those who have worked with him for their efforts. He mentioned such projects as restoring the historic Kornthal Church parsonage, assisting archaeologist Mark Wagner preserve Flatboat America, or helping in any way with restoration and preservation of such historic sites as the Sesser Opera House and the Cairo Public Library.

"It was quite a surprise and an honor," Swenson said. "It was the people of Southern Illinois we worked with all these years who really should have gotten the award. There are too many other people in this region who have been doing these kinds of things for a really long time for me to be singled out. There would be no Preservation Summer without them and the support of the University."

Swenson, a native of Metropolis now residing in Carbondale, said he grew up knowing little of his hometown region beyond the Superman lore and a bit about Fort Massac. He practiced as an architect for nearly 34 years in Carbondale and Springfield, teaching part of that time as well, and then serving solely as an architecture assistant and now associate professor at SIUC since 1999. Through the years he came to a realization that led him to expand his research, preservation and restoration activities.

"There is so much more to Southern Illinois than people realize," Swenson said. "For instance, hardly anybody knows the story about Aaron Burr's connection to our region through General James Wilkinson."

Then Commanding General of the U.S. Army, Wilkinson established a relatively secret military camp, Cantonment Wilkinsonville, near Grand Chain on the lower Ohio River during the winter of 1800-1801. The camp reportedly housed up to about a third of the U.S. Army at its peak during the summer of 1801. During a later trial, authorities charged Burr and Wilkinson with treason, alleging they planned for those soldiers to invade Spanish Texas and Mexico. The trial ended in acquittal.

"To really preserve and restore historic sites you have to know the history, not just of the building but of the people who crafted it and the people who used it," Swenson said. "They lived there, churned butter there, worked there and things like that. Because of the region's significance to our national history, our University is participating in an effort to establish the southernmost Illinois land between the rivers as a National Heritage Area, making this an important destination area."

• "Abraham Lincoln: The Observations of John Nicolay and John Hay" by Michael Burlingame.

• "The Maverick and the Machine: Governor Dan Walker Tells His Story" by Dan Walker.

• "Lincoln and Freedom: Slavery, Emancipation, and the 13th Amendment" by Harold Holzer and Sara Vaughn Gabbard.

In addition, the Society's "Book of the Year" Award was bestowed on SIU Press author Jason Emerson and his book "The Madness of Mary Lincoln."